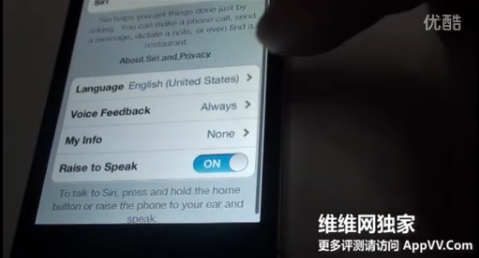 The iPhone 4S will be officially launched later this week on Friday, October 14th, but it appears someone has got access to a unit early and posted a video online showing initial browser benchmarks and Siri’s preference panel in the iOS Settings app. Siri’s preferences, located in Settings -> General, contain options to set the assistant’s language (English for Australia, United Kingdom and United States, plus French and German) and two menus for “Voice Feedback” and “My Info”. The video shows that these two options can be set to “Always” and “None”, respectively. Interestingly enough, Canada isn’t included in the list of English-supported countries, raising doubts as to whether it’ll be “officially” supported in Siri when the iPhone 4S comes out this week (Canada is a launch country, and it seems like Siri recognizes different accents fairly well). Last on the list is Raise to Speak – an option that should allow users to talk to Siri by simply raising the iPhone to their ear. Alternatively, Siri can be activated by pressing and holding the Home button.

As MacRumors also notes, Sunspider benchmarks show a score of 2222.1ms and a BrowserMark score of 89567. The iPhone 4 with an A4 chip running iOS 5 is believed to score 44856 in BrowserMark, thus making the iPhone 4S from the video twice as fast as the old-generation iPhone. The iPhone 4S comes with an A5 chip for improved performances and faster graphics.

The iPhone 4S is set to come out in seven countries on Friday, October 14th, and pre-orders have topped 1 million in the first 24 hours. It’s unclear how the person in the video below got an iPhone 4S early, but it appears to be from China as the carrier’s settings show China Unicom.