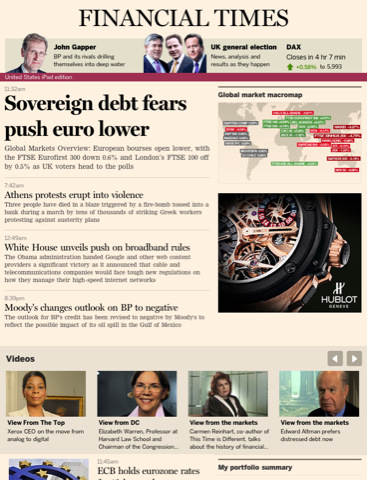 PaidContent reports the Financial Times is still negotiating with Apple over the implementation of iTunes subscriptions in its iPad app, which was generating 20% of the publication’s subscribers and over 1 million in revenue a few months ago.

With a month to go until publishers must either fall in with Apple’s new in-app purchasing terms or quit iOS in June, The Financial Times is not yet amongst the small early group to have consented to the new rules.

“We’re still in discussions with them,” FT producer management head Mary Beth Christie told paidContent:UK at World E-reading Congress in London on Tuesday morning. “We’ll see where they go. But we are fixed on the idea of holding on to our consumer data.

Like Time Inc., it appears that the Financial Times can’t agree on Apple’s subscription terms unveiled last February, which require publishers to give a 30% cut off every transaction to Apple and allow users to choose whether or not they want to share their personal information with a publisher. In the past months, in fact, the Financial Times stated multiple times that the iPad app could go somewhere else, perhaps on other platforms and tablets, as they couldn’t give up on subscribers’ data to stay in the App Store. Indeed, after a five-month trial period, Apple will begin pulling publishing apps that haven’t implemented subscriptions on June 30.

Apple managed to ink deals with several magazines, newspapers and publishers over the past two weeks, such as Hearst and Conde Nast, which began selling a subscription-based version of The New Yorker yesterday.