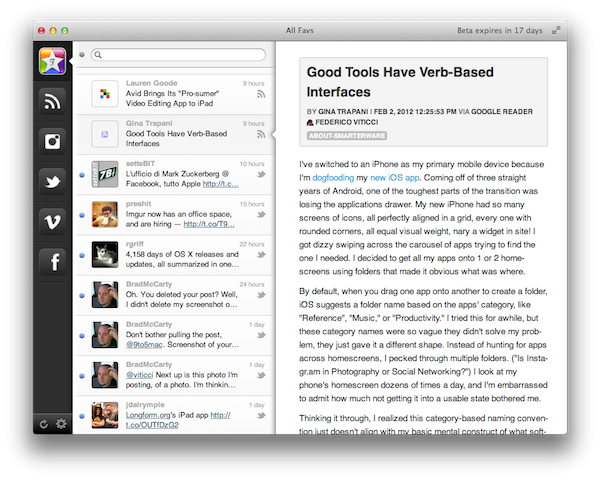 A few weeks ago, I tweeted I’d like to see some sort of Twitter client with its only focus being on Favorites – I keep Twitter open all day, and I save a lot of links. Prior to ending up in my Evernote or Pinboard accounts, the tweets I want to “save for later” are marked as favorites, which, I believe, provide an easy way to use a built-in Twitter functionality for general-purpose “bookmarks” that I may or may not consider for a post or more serious bookmarking in a second service. As you can see, I have a lot of favorites. The same is true for other services I use on a daily basis, such as Google Reader, Vimeo, YouTube, or Instagram: I like to be able to “star”, “like” and mark things as favorite so a) the service knows the stuff I’m interested in and perhaps will leverage this data sometimes in the future or b) perhaps other apps will. And while I’m still waiting for the ultimate app that looks at your Internet favorites and delivers content intelligently to you every day (albeit Zite is on the right path), it turns out someone has built a functional and nice-looking desktop aggregator called Favs.

Favs for Mac is in beta, so don’t expect a full review now – the developers are still polishing the interface and adding features, and it wouldn’t make sense to give a final verdict whilst the app is still being worked on. But the underlying concept is there, and it’s one of those things I’ve been looking for: a single app that collects favorites from a variety of services.

The list is pretty impressive already, and I assume it can only grow before the final release. I don’t know what else I’d add to that list (multiple accounts are already supported) as most of the services I use are already covered – perhaps some kind of Evernote and Instapaper integration, though I honestly can’t imagine how Evernote could work with Favs. Right now, I’m just happy Favs is shipping with a solid selection of services, and I like how the developers also implemented a unified inbox for all your favorites. 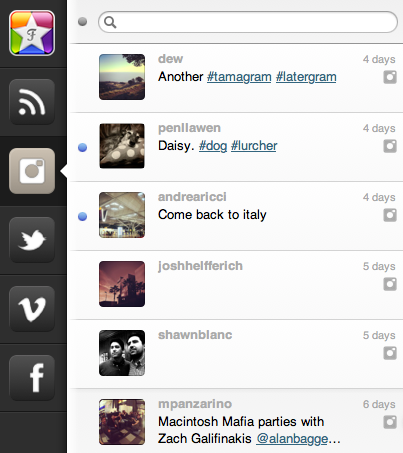 Favs, in fact, uses the old Tweetie-like interface with narrow sidebar + right panels (the one we’ve already seen in a multitude of Mac apps such as Sparrow and Reeder) to lay out service icons, unified inbox, and controls to manage settings and refresh all services. The app supports Lion’s full-screen mode, which is probably a good choice considering you’ll want to run Favs as a standalone app that is not your main Twitter or Google Reader client, as it’s focused on letting you view items that you wanted to save for later. Obviously one could easily dismiss this interface approach as “easy” or not innovative, but I believe this design can work for an application like Favs where you’re supposed to quickly switch between sections (sidebar), take a peek at headlines (mid panel) and read the actual content (right panel). As I’ve said this is a first public beta, which means features like keyboard navigation, sharing and contextual menus haven’t been implemented or refined yet. I was able to test Favs with my huge collection of Twitter favorites and it reliably loaded items from 500+ days ago without a single slowdown. I can only imagine things will get even better come the final release.

To me, Favs is a web nerd’s dream come true already. It’s got my Twitter favorites, my Google Reader stars, the stuff I like on Instagram, and it even lets me add multiple accounts if I really want to keep tabs on everything I save online. I look forward to reviewing a final version in the future, and I hope the developers are at least considering an iPad version for this.

For now, you can download the Favs public beta for free here.