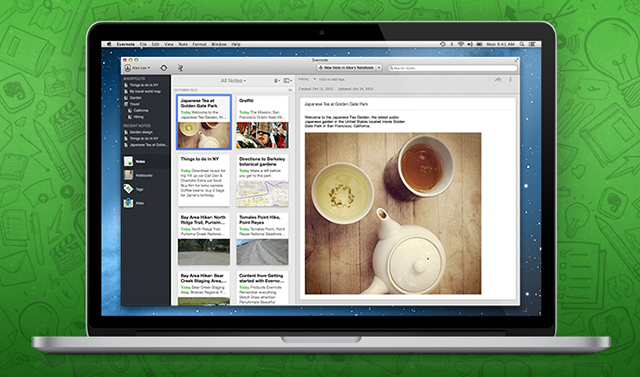 “Remember Everything” platform Evernote has today announced the next version of their Mac client: Evernote 5. With an extensive preview on Evernote’s website, the company has revealed some of the features and design choices behind the complete redesign of the desktop app.

Evernote 5 will primarily focus on improving the way users manage and access their notes, tags, and notebooks. With a new sidebar, users can drag items into the Shortcuts area; user shortcuts are accessible using CMD+1/9 keyboard shortcuts – just like bookmarks in Safari. Advanced users will still be able to “show lists” in the sidebar, but, overall, according to Evernote, the redesign will be focused on making the sidebar more visual, compact, and easier to use. In fact, the new sidebar will also list the five most recent notes for quick access.

Evernote says there are over 100 new features in v5.0. These include a new iPad-like Cards view for notes, improved sharing, a new look for the notes editor, more keyboard shortcuts, new views for tags and notebooks, and more.

Evernote highlights Atlas, a completely new feature to browse notes by location on a visual map.

Atlas is a brand new way to visually explore your notes in Evernote. Evernote helps you remember where you were when you took notes to help you have richer, more vibrant memories. Evernote Atlas reads the location where your notes were created and intelligently presents them to you on Place Cards based upon their proximity to each other.

Evernote 5 will undoubtedly be a major upgrade; hopefully the company won’t take away features from power users in its focus to make the app more accessible for everyone. Furthermore, Evernote says Atlas will work with notes created by Food and Hello, but it’s not clear if and how Evernote plans to better integrate version 5.0 with its ecosystem of apps – namely Skitch and Penultimate, acquired in the past year.

A beta of Evernote 5.0 will be available next week. Check out the feature list over at Evernote’s website, and a first teaser video below.