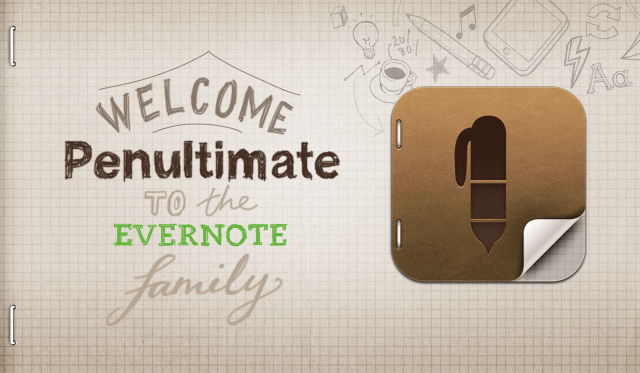 With a blog post published this morning, Evernote has announced the acquisition of Penultimate, a digital handwriting app for iPad developed by independent studio Cocoa Box. Penultimate, which we have covered on several occasions on MacStories in the past, is one of the richest – and best selling – handwriting apps for iPad, featuring smooth virtual ink to create notes users can send to a variety of services including Dropbox and Evernote. The latter was only added in January, and clearly caught Evernote’s attention as the company, after raising another funding round last week, is now focused on expanding its ecosystem of connected apps and services to new areas and platforms.

The acquisition will let Penultimate live on as a separate app, but more connected to Evernote, similarly to how Skitch – also part of the Evernote family – works now. It appears Penultimate will soon come to more devices, and gain deep Evernote search capabilities as well as a new synchronization option.

Importantly, Penultimate is not going away: it remains an independent application, and will continue to espouse the virtues of ease of use, elegance, and “that special something” that have kept you coming back. But I also think you’ll be thrilled, and even surprised, by how much more the app will be able to do for you as we work together to improve it and connect more profoundly with Evernote’s capabilities.

Evernote, on the other hand, writes:

Penultimate is hugely popular. In fact, according to Apple, it’s the #4 best-selling paid iPad app of all time. When you have such a great product, the last thing you want to do is mess with it. That’s why Penultimate creator, Ben Zotto, is joining Evernote to head up future app development. Penultimate will stay a separate, elegant application and will get many much-requested Evernote-y improvements including full search and synchronization. Ben will also lead the effort to put handwriting and digital ink functionality into other Evernote products and platforms, so you’ll see handwriting cross-pollination popping up everywhere.

Penultimate isn’t the only handwriting and note-taking app for iPad to feature Evernote integration – others like Noteshelf and Notability also have basic support for Evernote – yet due to its elegant interface and simple approach to handwriting, Penultimate has always managed to maintain its top position in the App Store’s charts.

In its goal to build a “company for the next 100 years”, Evernote has been spending the past year revamping its ecosystem of services and apps that connect to Evernote accounts to bring together text, audio, images, and documents to help people “remember things”. The company acquired Skitch and iOS text editor Essay, launched two new iOS apps (Hello and Food), a browser extension (Clearly), and recently announced it is working on a task-management application following the acquisition of another iOS app, Egretlist. With the acquisition of Penultimate, it’ll be interesting to see whether Evernote will also make changes to its own iPad app to include deeper integration with the standalone handwriting software, and if the main Evernote interface will gain new filtering tools to better organize text notes and handwritten ones (which already support optical character recognition for search when saved to Evernote).

Check out a video featuring Evernote’s Phil Libin and Penultimate’s Ben Zotto after the break.