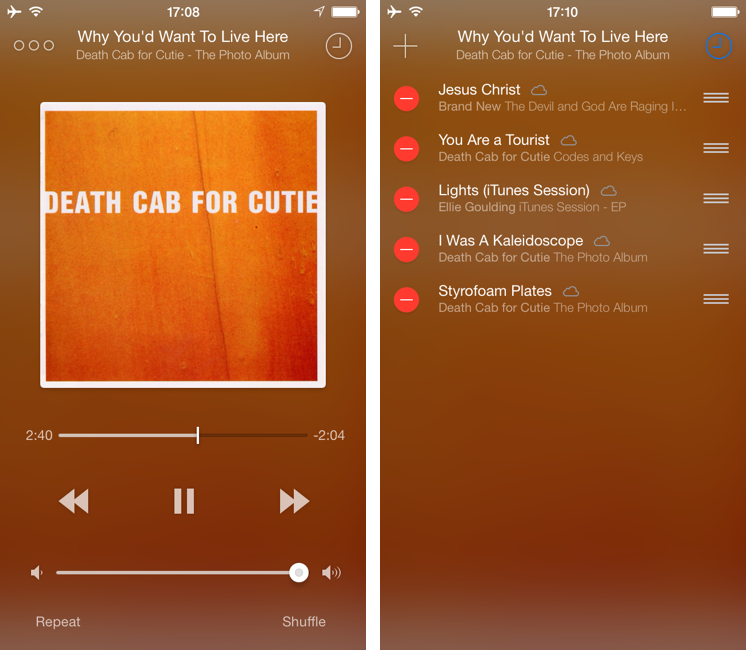 In my review of Ecoute 2 for iPhone, I noted how the app lacked a proper queue management system to replicate the Up Next feature of iTunes for Mac:

Ecoute has a “Play next” feature, but, alas, there’s no Up Next-like queue management: adding a song to the queue will put it at the top of the queue, not at the bottom after songs you’ve already queued up. On iTunes for Mac, you can either play a song next or add it to Up Next, but Ecoute can only “play next”. Furthermore, the Play Next button is based on another workaround that’s a byproduct of playback managed by the Music app: Ecoute can’t create a real queue in Music, and therefore every time you’ll add a song to the queue you’ll hear a brief interruption as the currently playing song stops and resumes itself. This is a hack, and it works, but it’s not elegant and the app doesn’t have all the queue-related features of iTunes 11, which is unfortunate.

In an otherwise excellent update that made Ecoute 2 my favorite alternative to Apple’s Music app, the lack of Up Next stood out. Fortunately, developers Louka Desroziers and Julien Sagot were already working on improvements to the queue functionality, which are available today in version 2.1 of Ecoute, released on the App Store.

When playing music in Ecoute, you can now choose between “Play Next” and “Add Up Next” from the tap & hold menu; this works for individual songs as well as entire albums or playlists. The way Ecoute’s queue works mirrors iTunes 11: you can play a song immediately after the currently playing one, or you can stack songs at the bottom of the queue.

Up Next can be accessed by tapping the clock icon in the Now Playing screen (which has been redesigned to show blurred album art in the background, like Apple’s Remote app). Songs can be removed and rearranged in the queue, and you can add more through the “+” button in the top left corner. Right now, Ecoute uses the default Music picker to add songs manually to the queue, but the developers confirmed they are working on their own solution.

There are still some bugs and hacks that Ecoute has to employ to work around Apple’s limitations for iTunes Match and queue management on iOS. Overall, though, Up Next is a solid addition to an app that I already considered superior to Music for navigation and responsiveness of the interface. Ecoute is $2.99 on the App Store.