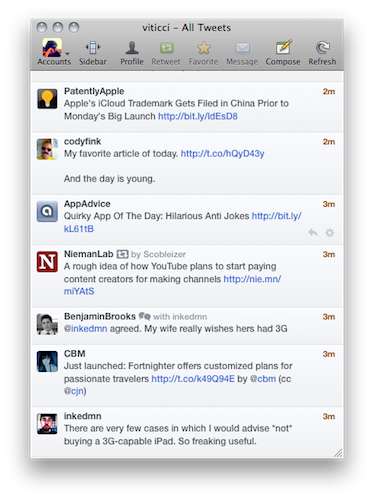 I’ve tried several Twitter clients over the past three years; some of them were iPhone apps with no Mac counterparts, others were Mac apps that found their way to iOS with smaller, more affordable versions. After the iPad came around and companies like the The Iconfactory and Echofon showed that it was possible to create a “Twitter ecosystem” outside of Twitter’s official applications (which also happen to be available on the Mac, iPhone and iPad), users like me started wondering whether it was possible to achieve the long-awaited dream of a continuous client – an app that always remembers where you left off, and allows you to start reading (in our case, tweets) again in the same position across devices, through the cloud. For Twitter clients, the concept is simple: if you’ve already read tweets from 3 hours ago on your Mac and then you pick up my iPhone, you shouldn’t see those tweets again.

Echofon has tried to implement this, with results far from perfection. Echofon’s unread sync isn’t always reliable, and when switching devices I often find the app picking the wrong spot in the timeline or automatically scrolling to tweets I’ve already read. Still, the idea is there: as users switch devices, the position of the “last read tweet” should be maintained with online sync.

Manton Reece, developer of Tweet Library for iPad at Riverfold Software, wants to offer developers who are building Twitter clients a solution to easily keep timelines in sync using Tweetmarks. Tweetmarks is a service that runs in the cloud and can be implemented to keep the last-read tweet in sync across apps and devices. With documentation available here, the developer explains:

I’ve already showed it off to a few developers, and if you’re writing a Twitter app I’d love for you to support it too. It will be baked into the next version of Tweet Library.

There are still some unknowns (especially around whether I will need to ask for help to cover hosting costs), but I wanted to launch it now before WWDC so that other Twitter app developers meeting at the conference can give me feedback on the service. Tweetmarks has actually been running for months, and when an opportunity came along this week for a new logo (thanks Alex!), I knew it was past time to finish documenting the service and get it out.

The concept is simple, yet nobody until now managed to pull it off with a system that’s reliable and unobtrusive enough to work “like magic” across platforms and different devices or computers. Developers who are interested in the project can learn more about it here and, personally, I’d love to see a new version of Twitterrific with such a feature (alongside live streams, but that’s another story). If you build and sell Twitter clients for a living, we strongly recommend checking out Tweetmarks for your next multi-platform update – the continuous Twitter client may start right here.