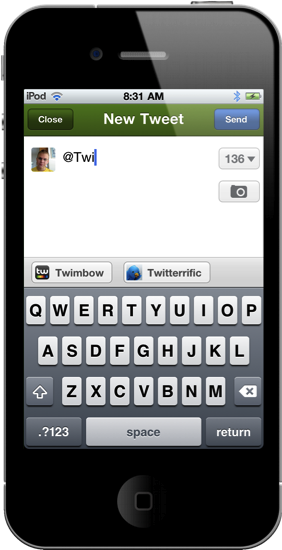 Launching late last night, Twitterrific 4.1 is now available in the App Store for immediate consumption! I’d consider this a milestone update for the iOS version of Twitterrific, as it greatly improves usability on the iPhone and continues the march towards feature parity with the desktop app. I’d say now, Twitterrific has unified their ecosystem such as that replies for example are now handled similarly. This change is most noticeable on the iPhone, where users are no longer taken to the single tweet view to perform actions. Quite frankly, that change alone should address the main complaint many had when wanting to perform simple actions: what used to take three taps now only takes two. 4.1 is a significant update and brings much requested features into the spotlight. 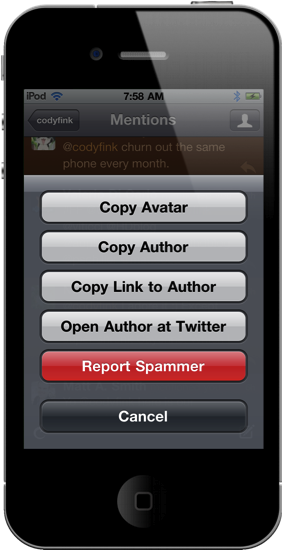 Spammers beware! Twitterrific now implements the ability to Report Spammers, provided you’re not following them back (that would be silly and prevents you from accidentally blocking your friends). Simply tap & hold on the offending profile avatar to bring up the option to kick their butt out of your timeline. 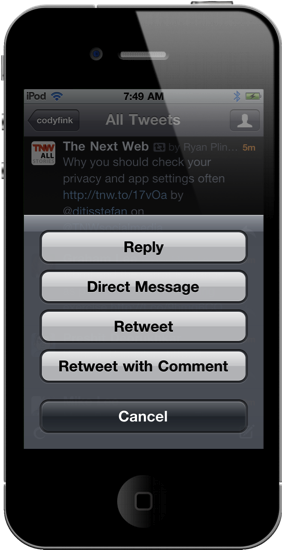 Composing tweets is improved by addressing username auto-completion, and replies are handled similarly to the Mac version: a reply arrow gives you the options you need to engage Twitter users in only a couple of taps (this is the feature that eliminates the need for the single tweet view). Simplicity continues in how Twitterrific handles single tap, tap & hold, and double tap actions. Actions feel easier and more intuitive to access, and the double taps can engage one of two actions either showing the conversation view (made noticeable by a new conversation indicator), or replies to the author (my favorite feature). If you triple tap, you can quickly favorite a tweet (shameless plug: if you use News.me this makes it easy to add news items for later). 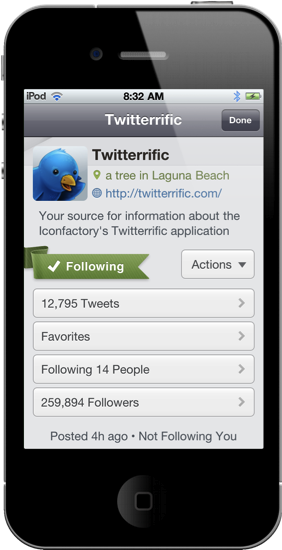 There are some slight visual changes as well, bringing the Mac stylings to the iPhone and iPad via the “sidebar” and profile views, re-styling the buttons and overall look, integrating font changes through the entirety of the app per your preference (large fonts are now better than ever), and you can toggle Global Trends on and off. Twitterrific now gives you the ability to adjust how mentions are displayed in the main timeline: while you still receive all mentions from strangers (people you don’t follow), whether they’re displayed or not in the main timeline is up to you via a switch in the preferences. This feature in particular I like, as it feels appropriate where information is displayed in a single stream. For fans of CloudApp, URL & media integration has been added - excellent for power users.

This isn’t just a minor update: Twitterrific 4.1 retools and completes the Twitterrific experience across iOS and Mac, delivering feature parity and making Twitterrific feel more simplified and faster than ever. Subtle tweaks to switching between user accounts feel better as your taken directly to the timeline, and changes to how actions and replies are handled continue to make Twitterrific an excellent client for those who want simple access to features everywhere. This month has seen some really great offerings from the Twitter world, and it continues to get better with The Iconfactory’s latest major release.

You can download Twitterrific for iOS for free on the App Store. It’s universal, and an in-app upgrade will remove ads for $4.99.