Although Apple is still dominant in the mobile space, Android is quickly gaining ground.In a report by Appcelerator/IDC, developers were found to be more optimistic about the future of the Android platform than they were about the iOS platform with a whopping 72% of them thinking that Android was best positioned to power a large number and variety of connected devices in the future.

This is fairly obvious really as we all know that iOS will only ever be on Apple devices and as more and more manufacturers jump on the Android bandwagon (hey, it’s free) then there will obviously be more devices out there running it.

Another obvious result was 85% of developers thinking that Android was the most ‘open’ platform with only 6% choosing Apple as the most open.

The most noteworthy result is the most capabilities as an OS, with Android getting 56% and Apple getting 36%.  Surely the capabilities of the platform depend on the phone it’s on?  My worry, if i was a developer, would be whether my app would work at it’s best on all the different types of hardware that could potentially be running it. At least with Apple you know that they have made the software with the hardware, so it will work on the vast majority of iOS devices, if not all of them. 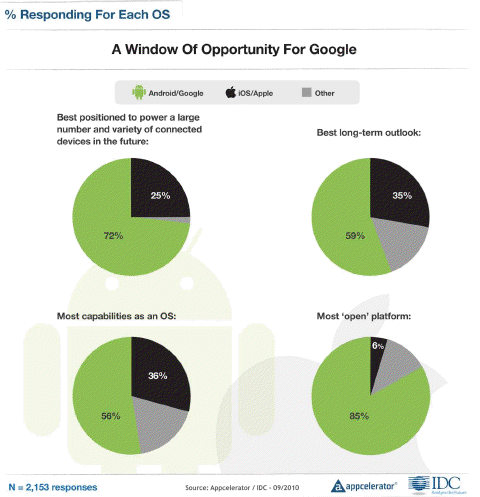 With all this talk of Android and iOS, you forget that there are other operating systems: 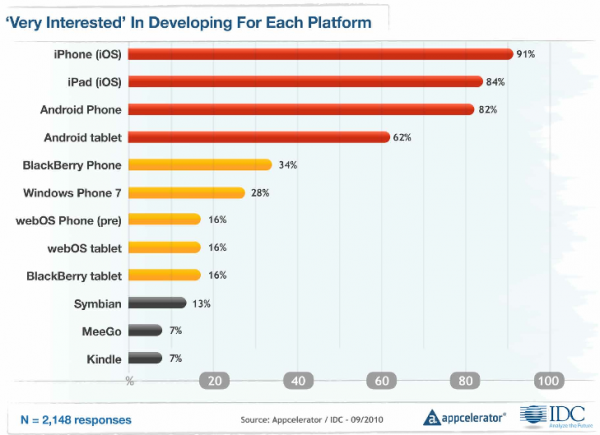 Developers are also showing a strong interest in TV apps with 44% saying they are “very interested” in Google TV while 40% are more interested in Apple TV apps, even though Apple hasn’t announced anything yet.  Scott Ellison, VP Mobile & Wireless, IDC said: