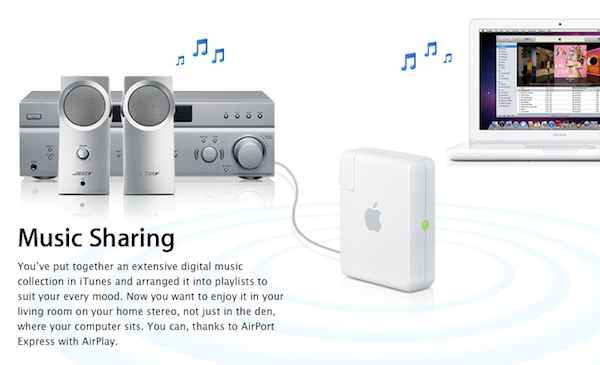 When Apple introduced AirPlay with iOS 4.2, they brought wireless streaming for music and video to iOS devices, as well as iTunes on the desktop thanks to the old AirTunes technology that allowed music streaming to an AirPort Express station connected to speakers with a simple audio jack. After the unification of streaming under the AirPlay name, several hacks in the past months allowed iOS and Mac users to enable streaming on unsupported devices such as iPhones or Macs. Developer James Laird, however, has achieved a different goal than simply activating audio and video receiving functionalities: by reverse engineering the AirPort Express (and thus AirTunes) private key used by Apple to stream audio to external music speakers, he released ShairPort, an open source AirPort Express emulator.

My girlfriend moved house, and her Airport Express no longer made it with her wireless access point. I figured it’d be easy to find an ApEx emulator - there are several open source apps out there to play to them. However, I was disappointed to find that Apple used a public-key crypto scheme, and there’s a private key hiding inside the ApEx. So I took it apart (I still have scars from opening the glued case!), dumped the ROM, and reverse engineered the keys out of it.

The concept behind ShairPort is very simple: instead of enabling streaming from an app to an official AirPlay device from Apple or third-party vendor, Shareport can turn any software or hardware into a wireless music receiver thanks to the cracked private key used by Apple. Being the project open source, virtually anyone could build a hardware receiver or application that streams music just like the AirPort Express station does through the AirTunes protocol.

While it’s very unlikely that manufacturers will adopt this hack to turn their devices into AirPlay receivers (why using the hack when you can just become an official AirPlay partner?), I’m sure we’ll see interesting things on the software end this week. ShairPort can be installed anywhere, opening to the possibility of gaming consoles, computers, or mobile devices gaining AirPlay functionalities previously reserved to the AirPort Express.