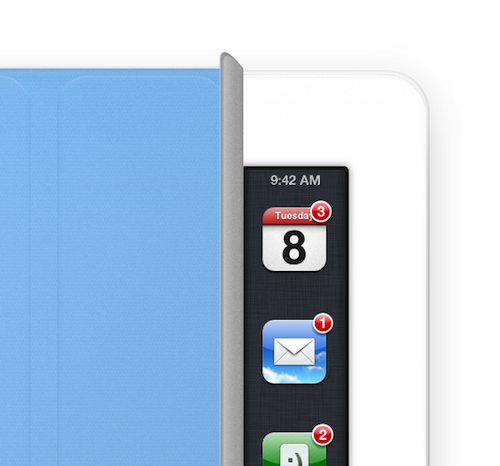 With much talk going around about iOS notifications and Apple’s plans to purchase a third-party developer to improve the system in iOS 5, it doesn’t come as a surprise that someone decided to realize yet another mockup of how notifications should work. What is interesting this time, though, is that the brief concept video put together by Tapmates is actually based on Apple’s Smart Cover promo video, with a twist. Tapmates thought that the possibility to quickly open the Smart Cover and take a peek at the iPad’s screen would make for a perfect implementation of the new iOS unread badges / notifications. If the Smart Cover reveals a portion of the screen when you start opening it but you can’t use the iPad like that, wouldn’t that portion of the screen be perfect for quick notifications?

This is a curious mockup for something that will likely never happen, but it makes me wonder whether or not there’s more than just display awakening in the future of the Smart Cover. What about a “smart lockscreen” that takes advantage of the cover? This is an incomplete mockup, of course, but I like the idea of replacing a part of the screen with useful information. Perhaps unread badges aren’t perfect, though. Anyway, check out the fake promo video below and discuss below if you think Apple could re-imagine the way the Smart Covers work just a bit.