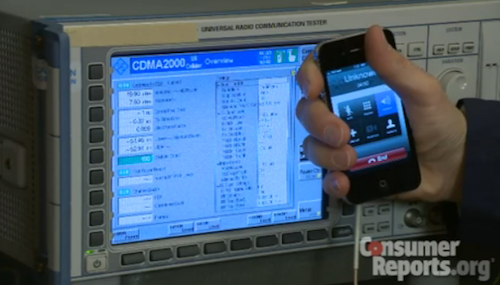 In spite of earlier reports that suggested ratings and reviews publication Consumer Reports would give a thumbs up to the Verizon iPhone (and debates on its testing methods), this is clearly not happening. For the second time since Consumer Reports smacked the AT&T iPhone 4 in July due to signal degradation issues (and eventually confirmed they could be easily fixed with duct tape, a free bumper or a better holding of the phone), the iPhone 4 can’t be recommended.

The Verizon iPhone 4 has a problem that could cause the phone to drop calls, or be unable to place calls, in weak signal conditions, Consumer Reports engineers have found in lab tests.

The problem is similar to the one we confirmed in July with the AT&T version of Apple’s newest smart phone. It can occur when you hold either version of the phone in a specific but quite natural way in which a gap in the phone’s external casing is covered. The phone performs superbly in most other respects, and using the iPhone 4 with a case can alleviate the problem.

Consumer Reports has performed its usual set of tests to determine whether or not the iPhone 4 on Verizon could be inserted into the list of recommended products. The iPhone 4 is among Consumer Reports’ highest rated smartphones, but can’t be recommended by Consumer Reports itself. Verizon, on the other hand, is widely recognized as America’s most reliable and recommended network. The Verizon iPhone has collected very positive reviews from all around the web.

With the iPhone 4, we placed a finger in contact with the lower-left-side gap. Reception typically dropped notably within 15 seconds or so of the gap being bridged. The iPhone eventually dropped calls when touched at very low signal strength—that is, at levels of around one bar in the phone’s signal-strength meter.

For those interested, video is embedded below. For those running a Verizon iPhone: sorry it can’t be recommended, but enjoy your phone.