Perhaps this will sound perfectly normal to some of you, but I find quite interesting that Apple keeps on spending money on Google’s adverrtising platform every month. According to a document leaked by AdAge, Apple spent almost 1 million dollars on Google ads in June - together with many big brands which spent a lot more millions. 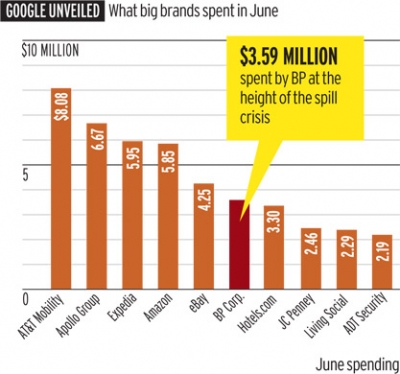 The data obtained by Ad Age includes huge brands such as GM, Walt Disney, Eastman Kodak and BMW, which appear to have spent less than $500,000 in June. Tech rival Apple spent just under $1 million on search during the month, as did chip maker Intel.

So while AT&T Mobility spent more than 8 million and BP had to use some cash (3.59 million) to recover from the Gulf disaster, Apple sits among the “small players” that don’t invest in Google ads that much. Still, 1 million dollars is a considerable number.

I’d like to see Apple promoting iAds on Google Ads. Speaking of meta.