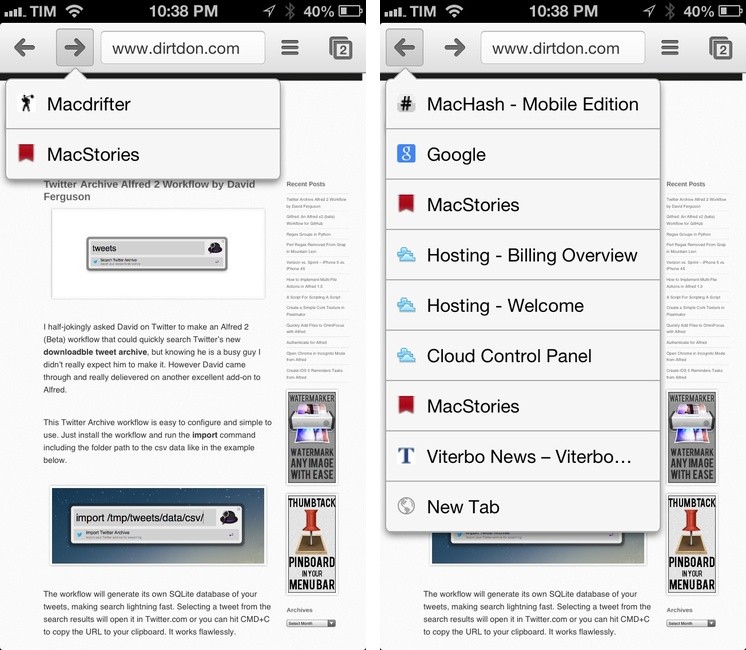 Released earlier today, Google Chrome for iOS has been updated with built-in Messages sharing and a new menu to access previously-visited webpages.

Available from the Share menu in the top toolbar, Messages integration brings up a modal Messages window to send a webpage’s title and URL to someone else. This is a good addition – I’ve long relied on bookmarklets and third-party apps to forward Chrome links to Messages – but unfortunately one I’ll make little use of, as iOS doesn’t let you quickly address a message to a pre-defined group of contacts.1

I find the new History menu much more interesting for my daily Chrome workflow. Similarly to Safari, you can now tap & hold the Back/Forward buttons to show a list of websites you have navigated to; tapping on one will take you back to that page. Like Apple’s implementation, this is a per-tab history; unlike Safari, the list of pages is shown in a dropdown menu rather than a full-screen modal view (on iPhone).

I use Google Chrome on a daily basis on OS X and iOS, and, especially on iOS, switching away from Safari was tricky because many apps still don’t offer an option to open links in Chrome instead of Apple’s browser. Fortunately, this is (slowly) changing, with developers increasingly adding support for Chrome (that is, until Apple will let users choose different default apps).

For me, the Chrome experience is superior to Safari on iOS for a series of reasons.

There is a single omnibox to use for URLs and web searches (Google uses a an extra keyboard row to solve this); you can change a new bookmark’s address right when you’re adding it; tabs can be closed with simple swipes on the iPhone; both on the iPad and iPhone, you can move between tabs by swiping from the edges of the screen.

I can go on: private mode is easier to activate; settings are available inside the app; you can request the desktop version of a website with one tap. Unlike iCloud (at least on my devices) sync through Google’s platform takes seconds to keep history, encrypted passwords, bookmarks, and tabs reliably available on every device. Chrome may be slower due to the lack of Nitro, but a series of little things makes the overall experience of browsing around every day faster and more efficient for me.

There are things that Chrome does awfully wrong. You can’t quickly get the URL of the currently open webpage; you can’t open “links from other devices” in different tabs (done by CMD-clicking on the Mac); you can’t copy images on tap & hold and – my biggest gripe so far – the lack of a bookmarks bar on iPad forces you to type the name of bookmarklets, therefore making it impossible to use window.getSelection with JavaScript.

Considering how Google went with a single top toolbar on the iPhone, I would love to see an optional bookmarks bar that could be activated by iPhone 5 (due to the taller screen) and iPad users. It just doesn’t make sense to have to visit a separate page for bookmarks – or worse, having to type their names manually. For power users, Chrome’s excellent support for x-callback-url would be even better in combination with an always-visible address bar containing bookmarklets.

It’s good to see that Google is listening to feedback and actively improving Chrome for iOS with new features. Today, they announced on their blog that they’ll change the omnibox “in the coming weeks” to only search terms instead of full URLs for web searches. That’s a nice improvement that will make it easier to tweak search queries, and I’m looking forward to it.2