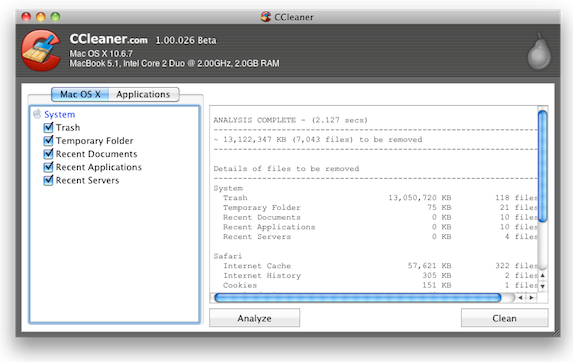 CCleaner, widely praised amongst Windows users, is making its way over to the Mac, with a first beta release available now. For those who are unfamiliar, CCleaner has been a Windows application that lets users easily delete and clean up their computer of temporary files, caches and other files that clog up their computer’s space, with many also using it for privacy, clearing out their browser data.

Being the first beta release, the OS X version has far less features than the current Windows version does. Nonetheless it still includes the core features of removing caches, cookies and history from either Safari or Firefox as well as clearing out the Trash, Recent Files and Servers and the Temporary folder.

Piriform, creators of CCleaner have said that they plan to release a full version within a few months, so expect more beta releases soon with support for more applications and more cleaning features. You can download the first beta release for OS X here.