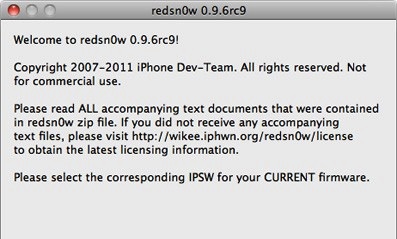 The Dev-Team today released version 0.9.6rc9 of their jailbreaking tool redsn0w, which jailbreaks all iOS devices running 4.3.1 - except for the iPad 2. So effectively that includes the iPhone 4 (GSM), iPhone 3GS, iPod Touch 4G, iPod Touch 3G, iPad 1 and the Apple TV 2G (PwnageTool only). However if you depend on ultrasn0w you must wait until there’s a compatibility fix, which is currently in the works.

The key (untethered) exploit is all thanks to Stefan Esser (@i0n1c) who is a security researcher in Germany that is experienced in vulnerability research. He was previously known in the iPhone jailbreak community for his “antid0te” framework which actually improved security by adding ASLR support for jailbroken iPhones, and before Apple had even implemented it. Needless to say the Dev-Team is pleased to see Stefan help them with jailbreak exploits.

As for the iPad 2, Apple unfortunately patched the two bootrom exploits that the Dev-Team had ready (SHAtter and limera1n) and so until a new one is found, no untethered jailbreak can be developed.