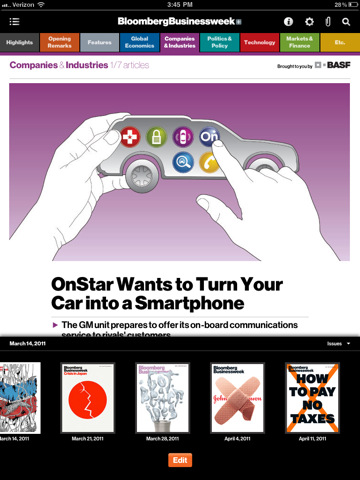 Amidst the debate surrounding Apple’s subscription system for the iTunes Store, Bloomberg BusinessWeek has released an iPad app that implements Apple’s new app subscriptions – and unlike many other publishers that agreed to test them, BusinessWeek’s ones are pretty cheap and attractive. New issues will be released every Thursday with in-app update, they weigh in at around 30 MB (very lightweight, considering other iPad magazines managed to achieve the 500 MB quota with hours of waiting for a download to finish) and they’re priced at $2.99. Print subscribers can get all the issues for free, but if you want to subscribe to the digital edition (with contains all the content of print, plus exclusive articles and rich interactive features) you’ll have to pay $2.99 – not a bad deal if you consider most app subscriptions have been priced at $4.99 and BusinessWeek’s own print edition costs $4.99 per issue. Finally, an iPad app that’s cheaper than its print counterpart, and has more content and automatic updates.

We are very pleased with Apple’s terms,” he said in a recent interview. As for being able to glean more information about their readers—something magazine publishers value highly, as it gives them more details with which to attract advertisers and build circulation—Okaro said that there will be a lot opportunities through things like reader surveys to get users to share information willingly.

The Bloomberg BusinessWeek app is available now for free in the App Store with in-app subscriptions. The app follows the magazines that implemented subscriptions in February, and anticipates a trend that should grow bigger come the June 2011 deadline – when developers of existing App Store publishing apps will have to enable subscriptions.