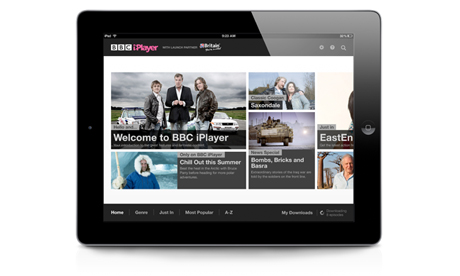 Last month we reported that the BBC was preparing to launch its iPad video-on-demand service iPlayer internationally for a fee under $10 by the end of the year. That day has come with the BBC today (Thursday, July 28) launching the iPlayer iPad app in Austria, Belgium, France, Germany, Italy, Luxembourg, Ireland, the Netherlands, Portugal, Spain and Switzerland.

Some iPlayer content will be available for free, but for full access users will need to pay either €6.99 a month or €49.99 a year. The program’s director spoke with The Guardian about the launch and reinforced previous statements by noting that the international version of iPlayer is a video-on-demand service, not a catch-up service as it is in the UK (primarily). The catalogue will include popular shows such as Top Gear and Doctor Who but will also offer a deep catalogue of shows that the BBC has aired over the past decades. At launch that catalogue is roughly contains roughly 1,500 hours of content – the BBC says it aims to add another 100 hours to that each week.

“What we’re trying to test in the pilot is the ability to drive exploration and discovery through a programming approach rather than an algorithm-based approach,” said Bradley-Jones. “We’re not trying to compete against a Netflix or a Hulu. This has to be tailored and hand-crafted, so we can create a tone of voice.”

Unlike the UK version of the app that was released earlier this year, the international version allows users to stream shows over 3G and even pre-download (cache) shows that they want to watch later, helpful for downloading a bunch of shows for a trip. For that feature they worked closely with Apple due to problems with iPad’s auto-sleep functionality interrupting downloads - ultimately Apple was happy with the app disabling the iPad’s ability to sleep whilst downloading shows.

If you don’t live in one of those 11 Western European countries that today got access, don’t stress because the BBC is going to continue to launch the iPlayer iPad app in further countries this year. In particular, Australia, Canada and the United States (the BBC notes it will probably charge around $7.99, roughly comparable with Hulu and Netflix) will see the iPlayer iPad app by the end of the year.

[The Guardian via The Next Web]