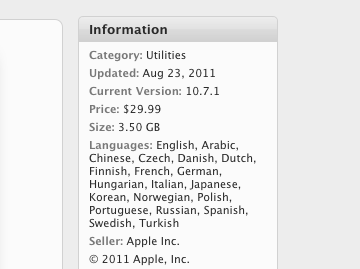 The first update to OS X Lion, version 10.7.1, was released exactly one week ago, yet unlike the operating system’s public release in July, Apple didn’t decide to make the update immediately available through the Mac App Store. Rather, Apple published 10.7.1, a minor delta update, using Software Update, a standalone desktop control panel that has historically taken care of updating Apple’s system apps. The fact that an update for Lion wasn’t showing up on the Mac App Store left some wondering whether that was the best way to approach new customers already getting used to Apple’s new purchase and update mechanism for apps. As usual, the company also made the update available on its website as direct download.

Earlier today, Apple has updated the Lion installer from the Mac App Store – that is, where you buy the “app” at $29.99 – to version 10.7.1, allowing customers to download a version of Lion already up-to-date with what’s being pushed to customers of OS X Lion via Software Update. Lion now reports “Updated on August 23, 2011” on the Mac App Store, though we can’t confirm at this point whether the Mac App Store directly updates the OS (thus eliminating the need for Software Update), or it’s simply a way for new downloaders to get the latest version of Lion.

Update: according to several reports we’ve received, 10.7.1 shows up as a new version in Software Update, but not on the Mac App Store. Therefore, it appears Apple is keeping the Store as a way to buy the latest version, and Software Update as the preferred way to download & install new updates.

Update #2: Dan Frakes reports 10.7.1 is now showing up in the Updates tab of the Mac App Store.