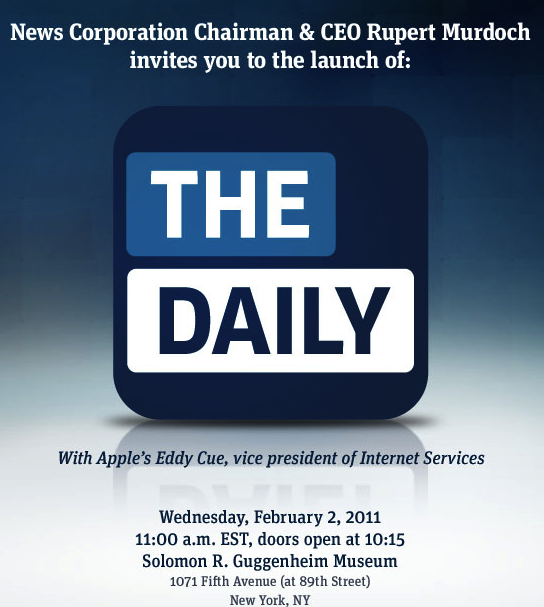 The Loop reports Apple and News Corp. will hold a media event in New York on February 2 to launch The Daily, the long rumored iPad-only digital newspaper that should rely on a new iTunes-based subscription service. This automatic billing system is rumored to be built into a new version of iOS, and we know Apple is currently testing iOS 4.3 with developers.

If the rumors are to be believed, will there be an “official” sneak peek at iOS 4.3 with subscriptions on February 2? And if The Daily will “launch” on that day, does it mean iOS 4.s3 is nearing its public release as well? Or maybe the subscription system doesn’t need to be built into iOS 4.3 at all, contrary to what the rumors suggested so far?

We will find out next week. It’s interesting that Eddy Cue, Vice President of Internet Services, will join Rupert Murdoch on stage to unveil The Daily. Perhaps these subscriptions functionalities don’t need to be baked into iOS, and could a server-side implementation on Apple’s end. It’s also worth considering that this is a News Corp. event with an Apple VP on stage – we don’t think Apple will provide an extensive preview of iOS 4.3 there.

We know that The Daily will be priced at $0.99 /week, as confirmed by News. Corp’s CEO James Murdoch.