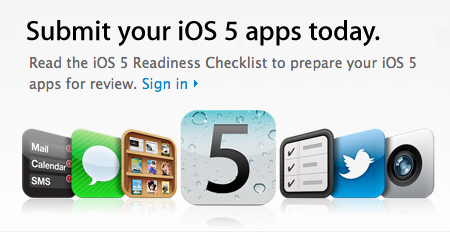 Following the release of the Golden Master seed of iOS 5, Apple has updated its developer portal with a new “iOS 5 Readiness Checklist”, asking developers to start submitting apps written specifically with the iOS 5 SDK. The checklist includes links to the iOS 5 SDK release notes, Xcode 4.2 for developers, and obviously detailed explanations of the various functionalities that will be introduced in iOS 5, such as Twitter integration, Newsstand, iCloud data storage, and more. Developers can head over this page to check out Apple’s resources for developing and submitting iOS 5 apps.

The next generation of the world’s most advanced mobile operating system will soon be in the hands of hundreds of millions of iPhone, iPad and iPod touch customers. Test your existing apps for compatibility and submit your new apps that take advantage of the exciting technologies in iOS 5 today.

The next generation of the world’s most advanced mobile operating system will soon be in the hands of hundreds of millions of iPhone, iPad and iPod touch customers. This major new release features more than 200 new features and an updated SDK with over 1,500 new APIs and developer tools.

Get your apps ready for the next generation of iOS. Install the GM seed of iOS 5 and build your apps with Xcode 4.2 GM seed. Test your existing apps for compatibility, review the iOS Data Storage Guidelines, and submit your new apps that take advantage of the exciting technologies in iOS 5 today.

iOS 5 and iCloud will be officially released on October 12th.

Update: Apple has sent two different email to iOS and Mac developers – the latter asking makers of software for OS X to submit iCloud-compatible apps today. Developers will be able to create apps that keep documents up to date across multiple machines thanks to iCloud, which automatically stores and pushes content to all your devices.

As a Mac Developer Program member you can now download the GM seeds of OS X Lion 10.7.2 and Xcode 4.2 and submit your iCloud enabled apps to the Mac App Store. With iCloud Storage APIs, your apps can store documents and key value data in iCloud. The documents are automatically kept up to date on all devices. 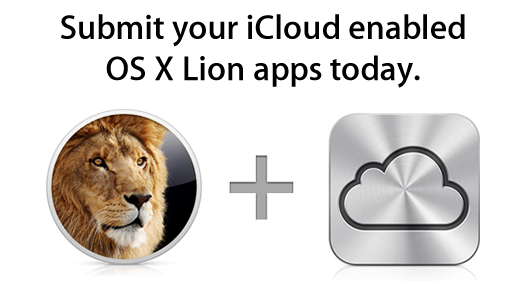 iCloud will be available on the next Lion software update, version 10.7.2, which has been seeded as GM today to developers for final testing.