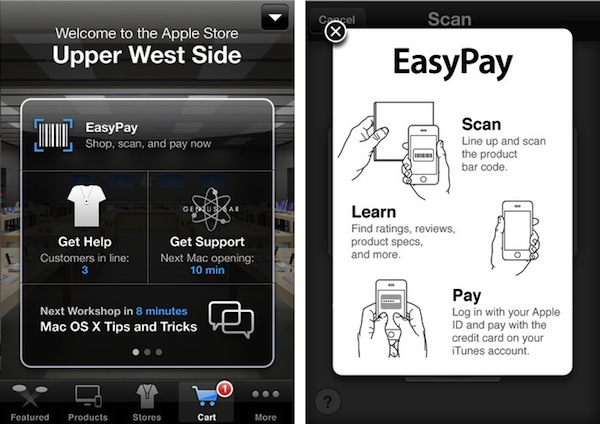 Two weeks ago Apple began rolling out a new initiative that allowed customers to order products through the online Apple Store and go to a retail store to collect them. Apple quickly trialled the initiative for three San Francisco stores before rolling it out to the rest of the Apple Stores in the Bay Area and New York City. Following speculation that suggested Apple could release an updated Apple Store app last Thursday, and then on Friday alongside the Fifth Avenue Apple Store renovations, the company has released Apple Store 2.0 in the App Store last night, enabling a number of functionalities such as Personal Pickup and EasyPay.

Personal Pickup lets customers decide to order an item online and pick it up at a local retail store. Apple says most products will be available within an hour in the US, although rumors claimed customers would be able to walk into sa store within 12 minutes after the purchase, skip lines and pick up their order. There’s no confirmation of this except that the feature is US-only for most in-stock orders.

Another new feature is EasyPay, a built-in functionality of the app that lets customers complete an in-store transaction for select accessories by quickly scanning a barcode with the iPhone’s camera. The feature is US-only and it requires the iPhone 4 or iPhone 4S, and an Apple ID with iTunes credit will be used to complete transactions.

Last, the updated Apple Store app comes with a new order status section in the More tab to track current and previous orders.

This 2.0 update largely falls in line with rumors from the past weeks, focusing on self-checkout and in-store pickups as the main new features for customers and Apple retail employees. These new features are, apparently, something Apple is heavily betting on to facilitate the shopping experience at its retail stores, and they are available now in the free update from the App Store.