The update is also available over the air on iOS devices, a feature that was introduced with iOS 5 beta 4 seeded on July 22. Whilst the regular iOS 5 beta download for a GSM iPhone 4 is 787 MB from Apple’s dev center, the OTA update is 128 MB. According to Apple however, to install iOS 5 beta 5 with an over the air update you’ll need to “erase all contents and settings” first:

To install iOS 5 beta 5 using over the air software update, you must first erase all content and settings on your device by choosing Settings > General > Reset > Erase All Content and Settings. Over the air software update can be initiated on devices running iOS 5 beta 3 and later by choosing Settings > General > Software Update.

This version of iOS is intended only for installation on development devices registered with Apple’s Developer Program. Attempting to install this version of iOS in an unauthorized manner could put your device in an unusable state, which could necessitate an out of warranty repair. 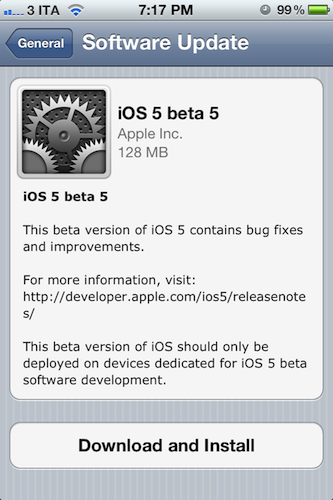 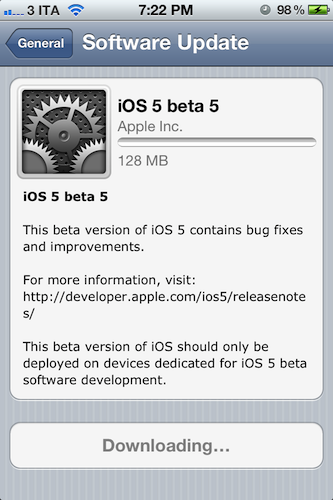 We will update this post with more information on the latest beta as it becomes available. iOS 5 is the next major release of Apple’s mobile operating system for iPhone, iPad, and iPod touch, bringing new features like PC-Free setup, iCloud, Notification Center and direct Twitter integration to iOS devices this Fall.