Apple has published their Q1 2015 financial results for the quarter that ended in December 2014. The company posted revenue of $74.6 billion. The company sold 21.4 million iPads, 74.5 million iPhones, and 5.5 million Macs, earning a quarterly net profit of $18 billion.

“We’d like to thank our customers for an incredible quarter, which saw demand for Apple products soar to an all-time high,” said Tim Cook, Apple’s CEO. “Our revenue grew 30 percent over last year to $74.6 billion, and the execution by our teams to achieve these results was simply phenomenal.”

The quarter sets a new record for Apple: before today’s results, the company’s record was $57.6 billion revenue reported for Q1 2014.

Fortune, polling a number analysts, predicted Apple would sell 67 million iPhones, 21 million iPads, and 5.5 million Macs on average. Analysts predicted earnings of $2.68 per share and $68.7 billion in revenue (year-over-year growth of 30% for earnings and 20% for revenue).

Starting this quarter, Apple has created a new ‘Other’ category for their financial results which will combine the sales of the upcoming Apple Watch, iPod, Apple TV, Beats products, and other accessories. The move will make it difficult to break out exact sales figures for the Apple Watch and is also different to how Apple treated the iPhone and iPad, which from the first quarter received their own category.

“Unprecedented popularity of iPhone 6 and iPhone 6 Plus. This volume is hard to comprehend.” – Tim Cook

An average of 34,000 iPhones were sold every hour. The fastest rollout in Apple’s history.

500 million visitors to Apple’s stores during the quarter (both retail and online).

On November 22, 2014, Apple shipped its billionth iOS device, a 64 GB Space Gray iPhone 6 Plus. The device is being kept at Apple.

Over 600 developers are integrating with HealthKit for iOS 8.

“We’re more convinced than ever that 2015 will be the year of Apple Pay.” – Tim Cook

Apple Watch will ship in April.

14% growth rate for Macs during the quarter. All-time record revenue.

Developers have earned $25 billion on the App Store to date.

Apple opened 10 new retail stores during the quarter, bringing the total to 447, 182 of which outside of the US.

Apple now has $178 billion in cash and marketable securities, up $22.7 billion.

iPhone 6 is the most popular iPhone model according to Tim Cook, although, with 74.5 million iPhones sold, he also added that they were “all popular” during the quarter.

Apple had the highest number of customers who were new to the iPhone in the quarter. The current iPhone line-up had the highest Android switching rate in the past three years.

Tim Cook on Apple Watch: “I’m using it every day and I can’t live without it”

“The upgrade cycle [for iPad] is longer than an iPhone, probably between an iPhone and a PC” – Tim Cook

25 million Apple TVs have been sold to date.

Below, a series of charts showing Apple’s Q1. 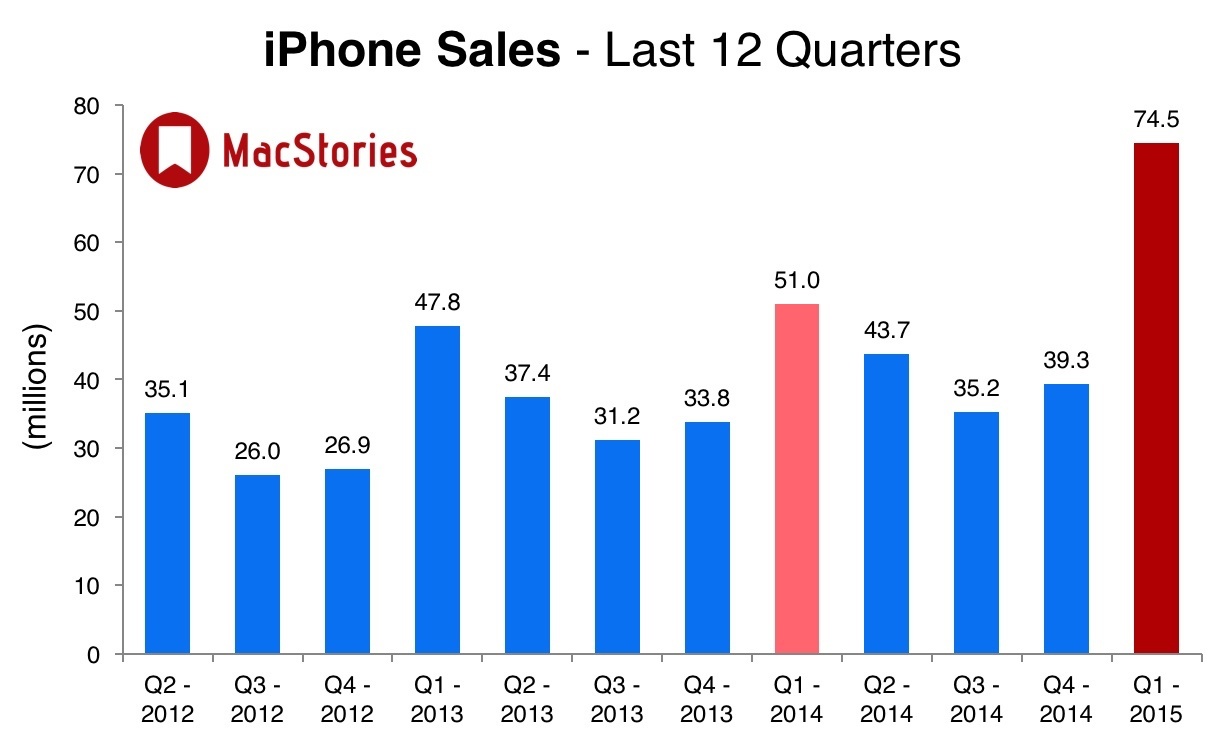 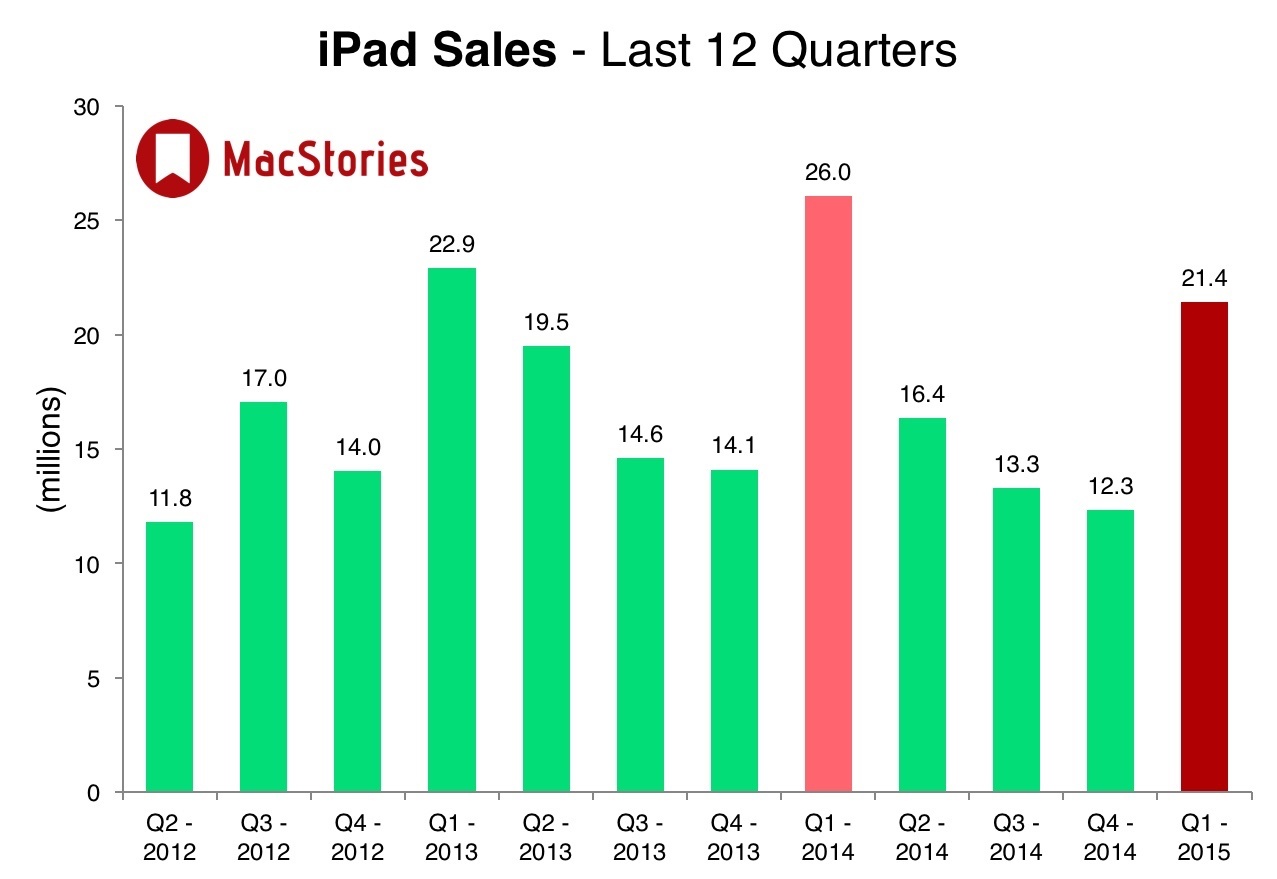 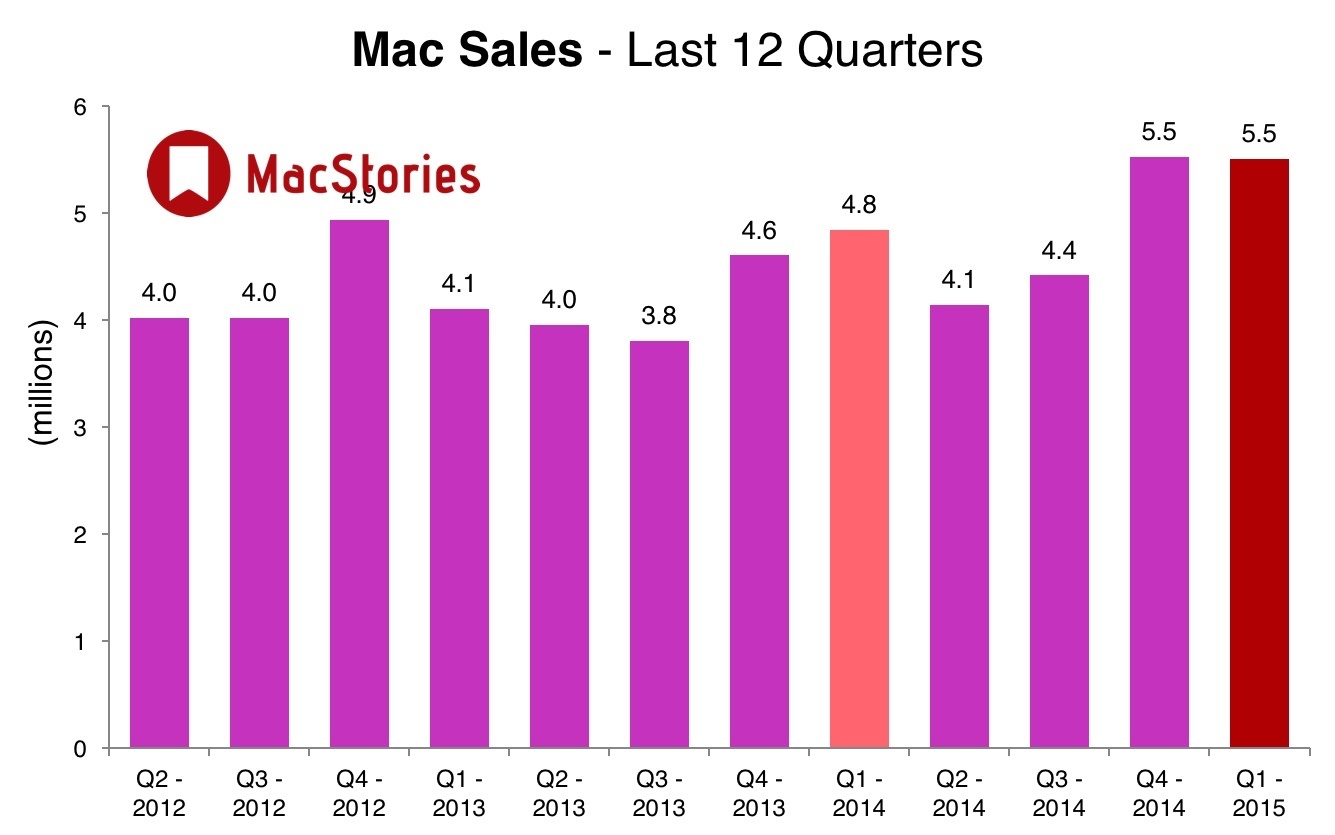 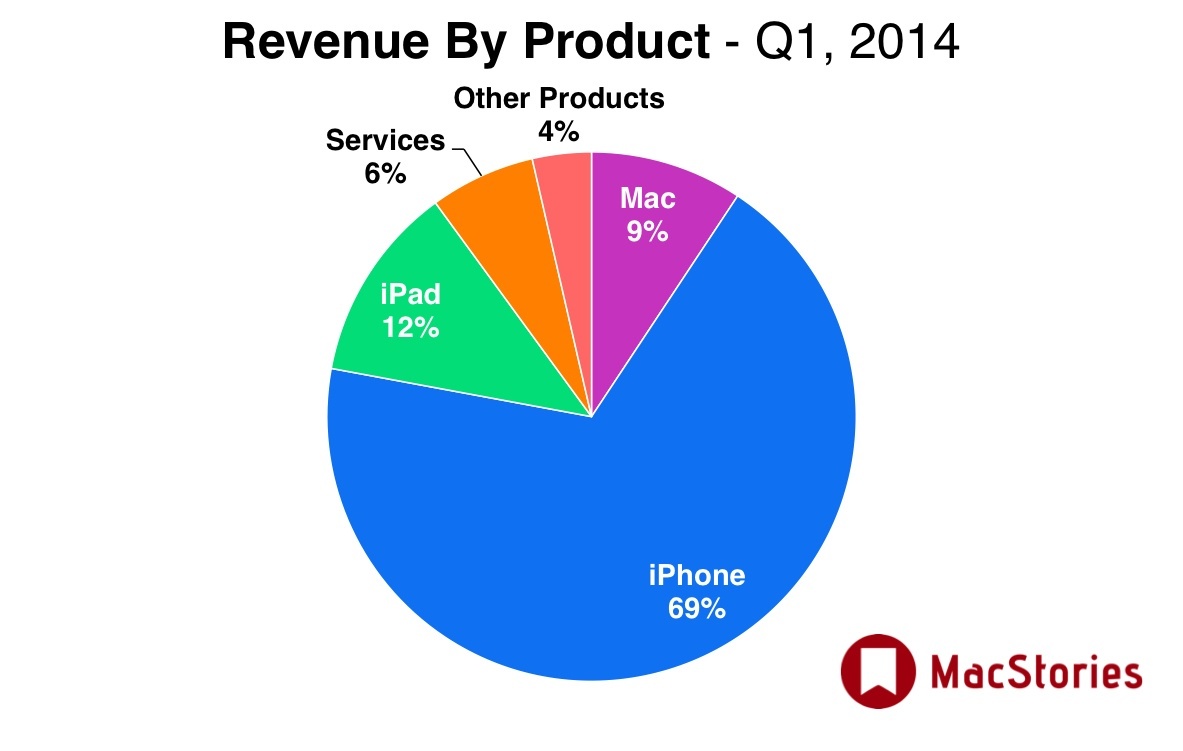 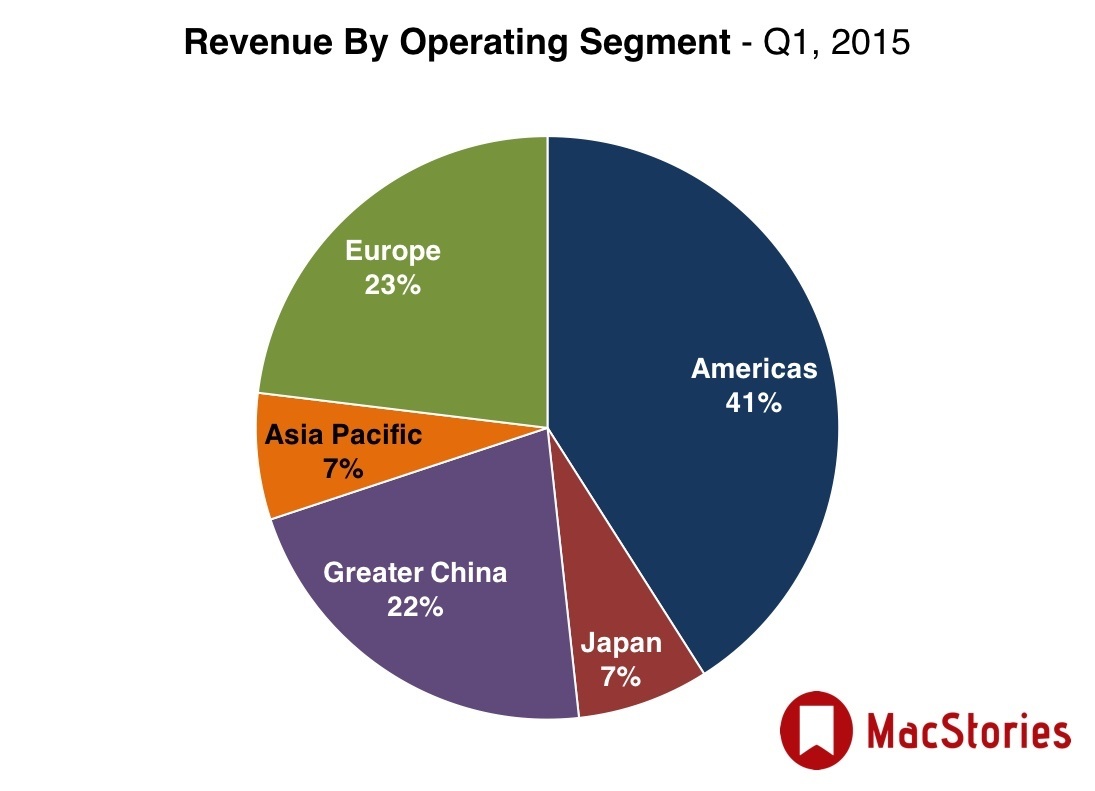 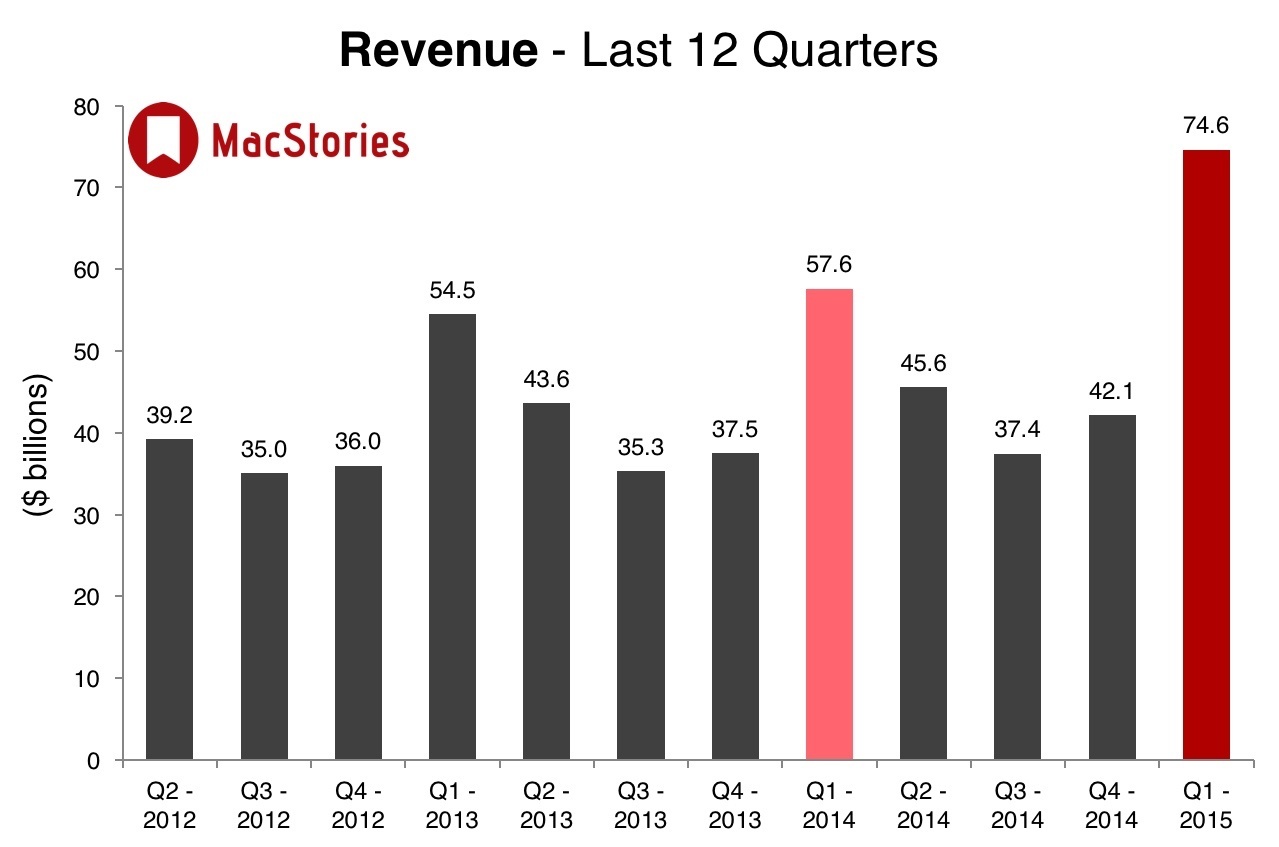 Some of the best tweets about Apple’s Q1 2015 results.

Time for an update… $AAPL pic.twitter.com/k4phERidCB

Apple is returning to growth. pic.twitter.com/QZ11wwzN48

$AAPL sold over 63MM iPads in the past 12 months. Industry sold about 130MM laptops (incl Mac).

iPhone 6 was most popular iPhone according to Tim Cook, he won’t expand more on iPhone 6+ mix other than to say geographic preference

Tim Cook refusing to disclose breakdown of iPhone sales, except that the 6 is the bestseller and it varies from place to place.