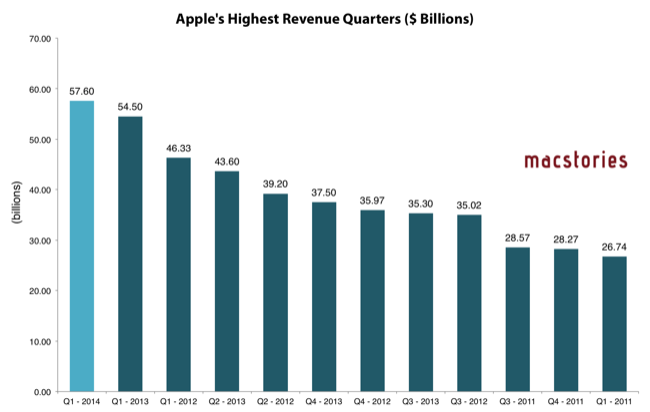 Apple has published their Q1 2014 financial results for the quarter that ended on December 28, 2013. The company posted revenue of $57.6 billion. The company sold 26 million iPads, 51 million iPhones, and 4.8 million Macs, earning a quarterly net profit of $13.1 billion.

We are really happy with our record iPhone and iPad sales, the strong performance of our Mac products and the continued growth of iTunes, Software and Services,” said Tim Cook, Apple’s CEO. “We love having the most satisfied, loyal and engaged customers, and are continuing to invest heavily in our future to make their experiences with our products and services even better.

The quarter sets a new record for Apple: before today’s results, the company’s record was $54.5 billion revenue reported for Q1 2013.

Fortune, polling a number analysts, predicted Apple would sell 55.3 million iPhones, 25 million iPads, and 4.6 million Macs on average. Analysts predicted earnings of $14.36 on sales of $58.01 billion (year-over-year growth of 4.0% for earnings and 6.6% for revenue).

Comparatively to this quarter’s results, Apple earned $54.4 billion in revenue in the year ago quarter, selling 48 million iPhones, 23 million iPads, and a little over 4 million Macs. Apple’s net profit was $13.1 billion.

Over 9 million new iPhones were sold during Apple’s opening weekend starting on Friday, September 20th, just before the last quarter ended on the 28th. With sales driven primarily by the introduction of the iPhone 5s, Apple raked in their highest fourth quarter earnings in the company’s history. The company posted revenue of $37.5 billion, selling a total 34 million iPhones, 14 million iPads, and just under 5 million Macs. Quarterly net profit amounted to $7.5 billion.

The iPad Air and iPad mini with Retina display, both announced during Apple’s second Fall Keynote on October 22nd, were later released on November 1st, and November 12th respectively. The iPad Air’s bezel is 43% thinner than the previous model, and weighs in at only a pound. The iPad mini with Retina display’s main benefit is obvious: its display has twice the resolution of the 1st generation mini. Both iPads have the same internal specifications, which includes an A7 CPU, iSight camera, and FaceTime HD camera.

Apple decided to keep the iPad 2 around for another generation, as well as the 1st generation iPad mini, which start at $399 and $299 respectively.

Then there’s the new Mac Pro. Slated for December and made available on December 19th, the Mac Pro is a complete departure from Apple’s traditional professional desktop tower: it’s a cylinder that’s 1/8th the size of the previous model. The base configuration starts at $2999, coming equipped with a 3.7 GHz quad-core Intel Xeon E5 processor, 12 GB of memory, Dual AMD FirePro D300 graphics, and 256 GB PCIe-based flash storage.

We established new all time quarterly record for iPhone and iPad sales. Revenue for quarter was $57.6 billion, up $3.1 billion or 6% from year ago quarter.

“No technology company has ever generated that much revenue in a single quarter”.

iPhone sales growth was very strong yoy in Japan, thanks to addition of DOCOMO in September. In the US market, Apple remains the leading smartphone manufacturer, with 41% smartphone market share with iPhone.

iPhone customers have 90% loyalty rate, significantly higher than the competition.

iPad sales were robust in mainland China, where sales doubled year over year.

Response to the more affordable iPad mini has been very strong.

Nearly every team in then NFL uses iPads as playbooks.

As of this month, 80% of iOS devices is running iOS 7, making iOS 7 the most popular OS in the world.

App Store has 63% to 37% marketshare advantage over Google Play for revenue of apps.

Opened 4 new retail stores during the quarter, for a total of 420 stores, including 166 outside the US.

“We continue to invest heavily in R&D.”

Question about opportunity of mobile payments with Touch ID. Tim Cook: “Let me avoid the last part of the question. In general, we see that people love being able to buy content, whether it’s movies, music, or books, from their iPhone using Touch ID. It’s incredibly simple, easy, and elegant, and we see an incredible opportunity there. We’re not limiting ourselves just to that. I don’t have anything specific to announce today. You can tell by looking at the demographics of our customers, and amount of commerce that goes through iOS devices vs. competition, it is a big opportunity on the platform.”

Q: Tim, I want to step back and talk about iPhone marketshare. Even with a new product, iPhone is going to grow at a fraction than what market is going to grow at; Macs have done this, but in iPhone, that is not happening. My question is: what is different about smartphone market that is not allowing you to gain share despite having the best product? Tim: Our objective has always been to make the best and not the most. We announced two iPhones for the first time, rather than one, and looking at last quarter, if you looked at sell through of what I’ll just call our entry phone, or mid phone, and our top phone, all of those grew YOY vs. phones that were in those categories previously. One reason for contraction in US market is that we sold more iPhone 5s than we projected. It took us some time in order to build a mix that customers were demanding. As a result, we lost some units for part of the quarter in North America. Another thing that happened in North America is that some carriers changed upgrade policies, this affected last quarter, and will have some effect on current quarter. This restricted customers who were used to upgrading earlier than 24 months that they’re allowed.

“Cook: I think our customers are going to love what we’re going to do.”

Below, a series of charts showing Apple’s Q1. Click for larger size. 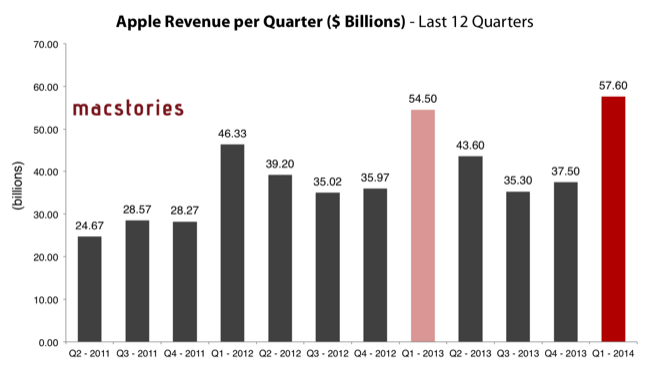 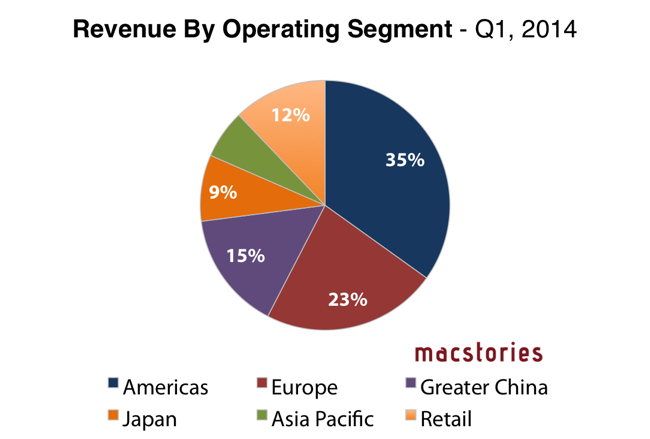 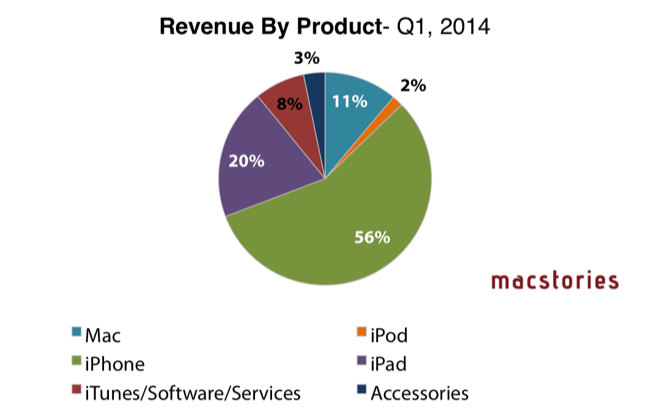 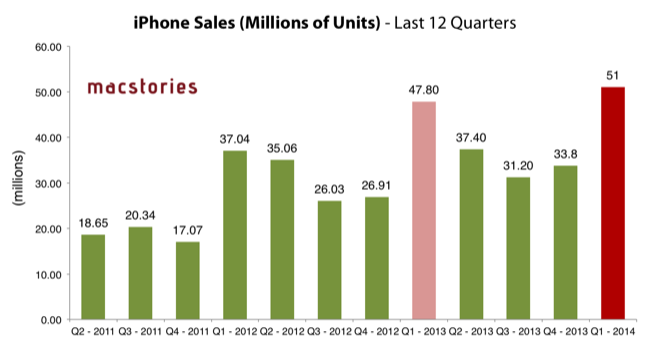 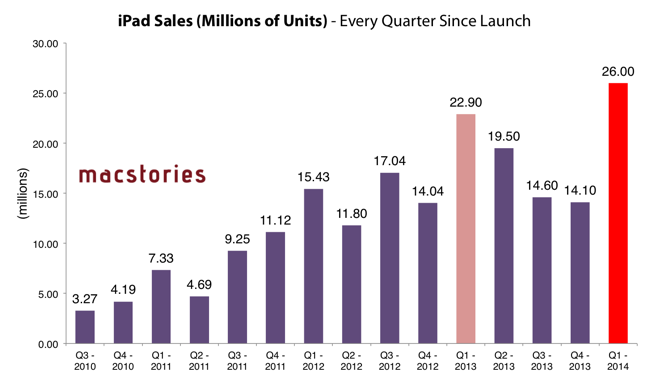 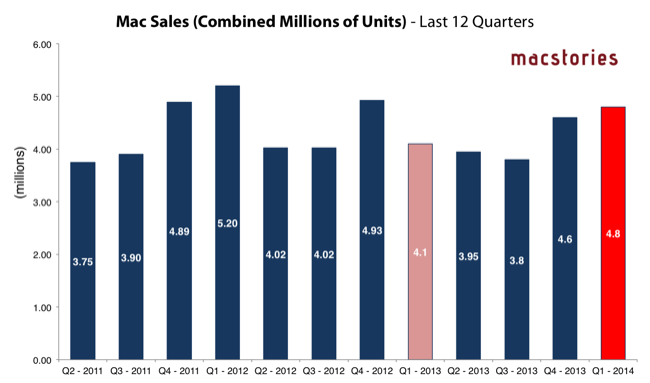 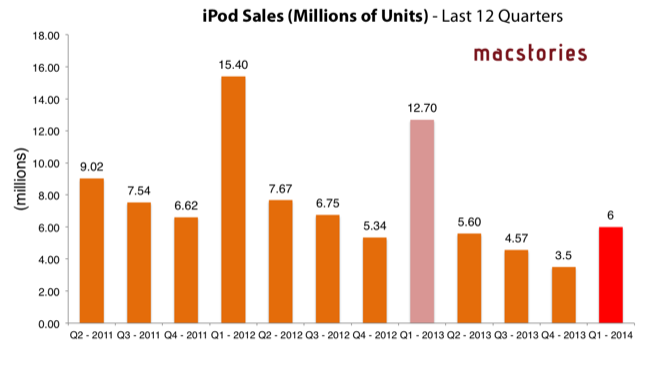