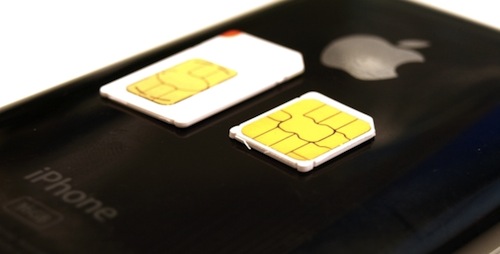 According to Reuters, an executive of Orange has confirmed the French carrier is backing Apple’s plans for a new standard to make SIM cards smaller in order to use them in future thinner mobile devices. The proposed standard aims at reducing the size of SIM cards, which are currently implemented as “micro” models in the iPhone 4 and iPad.

We were quite happy to see last week that Apple has submitted a new requirement to (European telecoms standards body) ETSI for a smaller SIM form factor – smaller than the one that goes in iPhone 4 and iPad,” said Anne Bouverot, Orange’s head of mobile services.

“They have done that through the standardization route, through ETSI, with the sponsorship of some major mobile operators, Orange being one of them,” she told the Paris leg of the Reuters Global Technology Summit.

Reuters claims the approval process for such a new standard would take time, with new devices carrying the new SIM models not coming out at least until next year. A rumor surfaced last year indicated Apple was working closely with Gemalto to develop an integrated SIM card that would be embedded in every iPhone to enable users to quickly switch between carriers without restrictions and obligations, but this new report seems to suggest Apple is simply aiming for a smaller chip, perhaps following the opposition from carriers to an embedded SIM that would cut mobile operators out of the retail game.