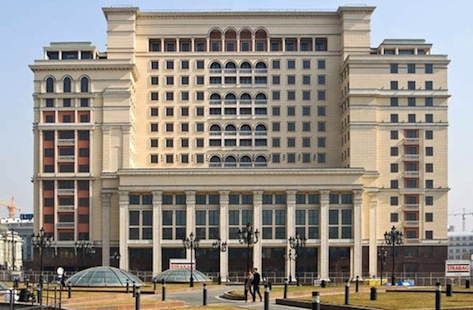 According to a report by ifoAppleStore yesterday, Apple is finalising plans and decisions to lease and open up its first Apple Retail Store in Russia. Top executives of the Apple retail division including senior vice president of Retail Ron Johnson and vice president of Real Estate Bob Bridger were seen touring the reconstructed Hotel Moskva where Apple is looking to lease a two-level, 16,000 square-foot space for an Apple Store.

Hotel Moskva is currently in the final stages of a reconstruction; the historic building is close by to the Red Square, the Kremlin and other historical monuments and sites in central Moscow that are popular among tourists. Whilst no lease has yet been signed, a decision could be made soon according to sources of ifoAppleStore. The hotel with its beautiful stone façade will also be home to the first Four Season’s hotel in Russia and numerous other retail stores in an extensive and modern shopping mall.

Eastern Europe is currently devoid of any Apple Stores and the opening of its first store in Russia could signal a significant commitment to expanding growth in the eastern Europe region, similar to that of its plans for Asia. Currently the most eastern store in Europe is the recently opened Altmarkt-Galerie in Dresden, Germany. But beyond that there are “no Apple stores in any of the 15 republics of the former Soviet Union (USSR), which dissolved in 1991”.