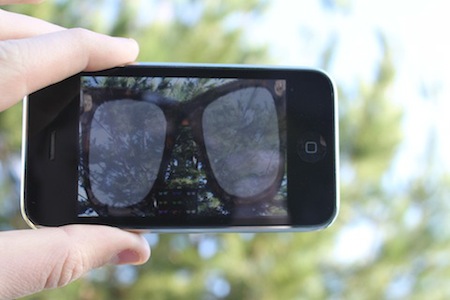 A new patent application surfaced at the U.S. Patent and Trademark Office entitled “Display that Emits Circularly-Polarized Light” and discovered by AppleInsider today points at a new kind of LCD screens capable of playing nice in outdoor viewing when an iPhone or iPad user is wearing sunglasses to protect himself from harmful UV rays. The problem with polarized sunglasses – not necessarily LCD screens exposed to directly sunlight, something Apple’s own displays have long been criticized due to poor performances when compared to the Amazon Kindle – is that they “only allow through light with an electric field that vibrates in the vertical direction”, and considering current LCD displays have an electric field that vibrates in one direction, the user wearing polarized sunglasses may see distorted images when looking at the screen from certain angles. Polarized sunglasses and LCDs don’t play nice together, and Apple’s proposed solution is aimed at building an LCD display that, with circularly polarized light, allows sunglasses to not see black areas, distorted images, and so forth.