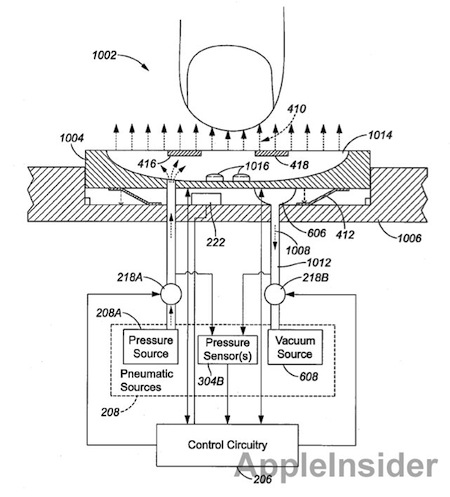 A new patent entitled “Input Devices and Methods of Operation” uncovered today by AppleInsider reveals Apple has been experimenting with a new kind of desktop keyboard that, following the ongoing trend of reducing the size of keyboards to make them more compact and portable, allows users to receive tactile feedback upon pressing keys through an “air pressure” technology. As the patent notes, keyboards have become thinner and more compact over time, reducing the space between keys and the actual keyboard case design, thus preventing, in many cases, users from having proper feedback upon hitting keys with their fingers. The proposed keyboard design would use proximity sensor below each key to recognize the distance between a user’s finger and the key, allowing a built-in air system to apply a certain resistance or pressure, providing a way to receive tactile feedback on a slim and compact design.

The patent filing describes a system that would “flow air from the input device,” perhaps through openings in the surface of an individual key on a keyboard. This would provide tactile feedback to the user before they make physical contact with the key surface.

This air pressure could be used to apply air pressure against a user’s fingertips, giving tactile feedback even though the key may not move as much as a key on a more traditional keyboard.

Whilst this technology sounds like something Apple may not implement until 10 years from now (Apple, like many other companies, usually patents innovative designs and concepts that most of the times never find their way in actual products), it’s worth noting that a patent discovered earlier this year outlined a new type of keyboard capable of receiving multitouch input from the user thanks to cameras placed around the perimeter of the accessory. If Apple’s trying to reinvent the keyboard, these patents are certainly a starting point to keep in mind for the future.