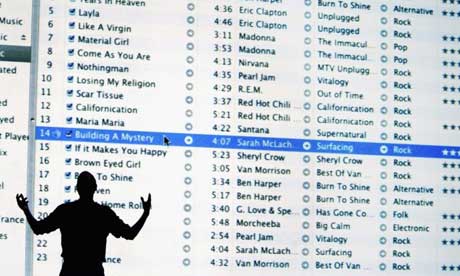 According to the CNN (via MacRumors), Apple is in talks with music industry executives to improve the sound quality of songs offered in the iTunes Store, bringing them to high-fidelity standards of 24-bit instead of the current 16-bit offerings:

Professional music producers generally capture studio recordings in a 24-bit, high-fidelity audio format. Before the originals, or “masters” in industry parlance, are pressed onto CDs or distributed to digital sellers like Apple’s iTunes, they’re downgraded to 16-bit files.

From there, the audio can be compressed further in order to minimize the time the music will take to download or to allow it to be streamed on-the-fly over the internet.

CNN reports Apple might as well offer these high-quality versions as separate “premium” purchases available as an option next to the existing iTunes Store 16-bit files. The move to 24-bit, however, would bring some issues with compatible hardware – considering that iTunes also works on Windows PCs:

Many models of Mac computers can play 24-bit sound, and the iTunes program is capable of handling such files. But most portable electronics, and many computers, don’t support 24-bit audio.

To make the jump to higher-quality music attractive for Apple, the Cupertino, California, company would have to retool future versions of iPods and iPhones so they can play higher-quality files.

In 2009, Apple made the first steps to increase the quality of iTunes digital downloads by offering “Plus” – a selection of albums and songs encoded at 256 kbps without digital rights management (DRM) protection copy. Regular iTunes downloads used to be encoded at 128 kbps with DRM enabled by default. Shifting to higher quality song downloads also rises some questions on Apple’s rumored streaming service for music and data center in North Carolina: will a section of the data center be dedicated to these rumored 24-bit songs? And if the rumors of “iTunes in the cloud” are to be believed, will Apple allow users to stream 24-bit audio files to their mobile devices?

As far as kbps stats are concerned, Spotify’s current Premium subscription enables users to stream 320 kbps songs from the cloud onto their computers and iPhones, offering an option to decrease quality on slower 3G connections.