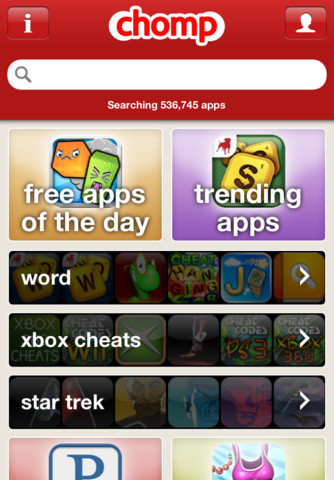 According to MG Siegler at TechCrunch, Apple has acquired Chomp, app search and recommendation engine that has an iPhone app available in the App Store. Siegler reports that the Chomp team and product will be transitioned over to Apple, although details of the deal aren’t clear:

My understanding is that such deals will remain intact for now but are likely to end once the Chomp team and product transitions over to Apple. The same is likely true for Chomp’s stand-alone products.

I haven’t been able to learn the exact terms of the deal, but I hear that all the investors should be very pleased with the outcome. This is not a cheap “acqui-hire”, Apple has bought the Chomp team and technology and plans to use both to completely revamp App Store search and recommendations, I hear.

With Apple’s Tim Cook famously saying he’s not religious about holding or not holding the cash (nearly $100 billion) at Apple’s disposal, the acquisition of Chomp should be a clear sign of the company’s willingness to invest in talent and technologies from startups that have proved to care about quality of their products. Chomp in particular is an interesting choice for Apple, as it might signal important changes coming relatively soon to the App Store, especially on the side of discovery of apps with recommendations targeting a user’s tastes and behaviors. With over 700,000 apps available (per AppShopper) and thousands getting approved every day, the issue with discovery is a real one: most developers struggle to get their apps noticed and the best chance for popularity still remains Apple’s own feature in the App Store’s homepage with the “App of the week” and “New & Noteworthy” sections. Furthermore, the existing App Store infrastructure doesn’t have integrated sharing features for Twitter and Facebook, which Chomp has.

It’s obviously not clear what Apple has in store for Chomp yet, but here’s a couple of wild guesses based on the app’s existing functionalities:

Improve app discovery learning what an app does, rather than just its name. Currently, Apple seems to be basing its algorithm for discovery (part available in the Genius UI, part in iTunes under an app’s description) on categories and “what other customers also bought”. Chomp is capable of learning an app’s core functions, and find similar or complimentary apps.

Build sharing of apps for Twitter and Facebook right within the App Store. This would be a nice feature in iOS 6 – alongside a mobile wish list.

Improve search with suggestions, tags, and a cleaner layout similar to what Chomp already does.

Let App Store users create profiles and revamp the whole review system, as developers have been asking for years now. The profile option would be an interesting possibility, and it could easily work in conjunction with Ping, which has failed to gain traction. This has also been experimented by other apps that have tried to compete in the app recommendation space in the past years.

As with the recent Anobit acquisition, it’s likely Apple will confirm the acquisition of Chomp soon. It will be interesting to see if and how Chomp’s technologies will be integrated with a future version of the App Store, which keeps on growing at a tremendous pace but needs a better system to discover apps and filter out less important results.

Update: Apple has confirmed the acquisition to AllThingsD without providing further details on how the service will be integrated with the App Store.