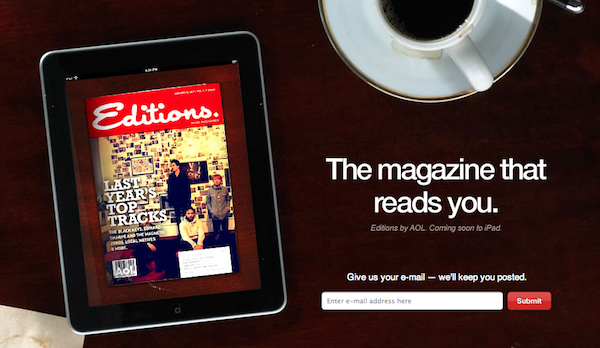 Following a trend that sees publishers and companies struggling to deliver personalized content to iPad owners who want to filter news and articles out of their Twitter and Facebook social feeds, AOL is planning on releasing a Flipboard-like magazine for iPad this summer called Editions, BusinessInsider reports. Editions, currently teased on the web with an official landing page, appears to be a much more complex solution than Flipboard though: whilst the iPad app of the year 2010 pulls any link shared on your Twitter or Facebook account, not applying any sort of filtering or smart recognition algorithm, Editions will try to be intelligent enough to only display content that’s relevant to you, related to your location, in a way that reminds of a daily newspaper delivered to you once a day. Call it a mix between Flipboard and News Corp.’s The Daily, AOL’s Editions will even go as far as creating a cover for the top story in your social feed, as well as aggregating all content from AOL-owned publications like TechCrunch and Engadget.

To pick these stories, Editions will look at what your social networks are recommending and the general topics they seem to be interested in, as well as your location (to deliver local news). Then, it will look at which stories you click on and how long you spend reading them, and adjust over time.

Editions is also not meant to replace Web surfing – instead, it will be delivered once a day, just like a newspaper. Temkin noted that AOL’s usage statistics show that people don’t use an iPad like a mobile phone, checking it constantly throughout the day. Instead, usage peaks at morning and night, when people are home and have some time to sit back and read.

Editions will launch this summer (before September 20th, they say) only on the iPad, as AOL doesn’t believe Android tablets will gain much “traction.” The idea sounds interesting – as every concept revolving around automatic news personalization does – but it’ll have to face fierce competition from the likes of News.me (which relies on a similar concept and is developed by the folks behind URL shortening service bit.ly), Yahoo’s upcoming Livestand and the next version of Flipboard, which is rumored to be heavily based on a new algorithm for better news filtering as the result of the acquisition of Ellerdale Project last year. Flipboard recently announced they tripled the app’s usage and doubled the userbase in just over two months.