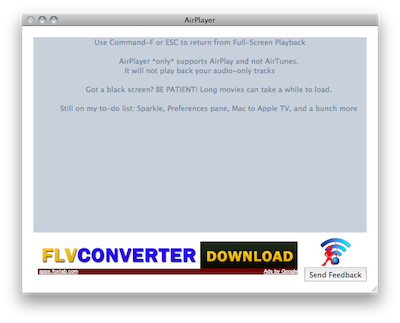 Missed Erica Sadun’s latest AirPlay hack yesterday? It’s a new Mac app called AirFlick that allows to send video and URLs (say, from Youtube.com) from OS X to the Apple TV without needing to load a file from iTunes. It’s a standalone app that can send video files through AirPlay to an Apple TV 2nd gen running on your local network. Together with AirPlayer (which allows you to send videos and photos via AirPlay to a Mac), it’s another great hack from Erica Sadun.

It turns out, anyway, that AirFlick can do a lot more than “simply” allowing you to send video from OS X to the Apple TV. First, TUAW reader BC managed to stream with AirPlay .avi files using Air Video Server’s live conversion system, by copying the URL of AVS’ m3u8 playlist and paste it in AirFlick. It requires some serious Terminal skills, but it’s possible.

After a little experimentation I was live streaming transcoded AVI files from my Mac’s AirVideo Server to Apple TV via AirFlick, as the video here shows. Instead of using BC’s method (which appears on the earlier AirFlick post), I grabbed the m3u8 URL by temporarily streaming from Air Video on my Mac to my iPad.

Another hack, also posted on TUAW, shows AirPlay running on a XBMC Ubuntu linux installation. Several readers pinged Erica to let her know that they’re working on Windows support for this, too.

Check out the videos below. AirPlay isn’t just for Macs, iOS and Apple TV anymore, and with third-party speakers on the horizon and hacks coming from all over the Internet to extend its functionalities, we’re just waiting for Apple to open up its technology and make it available for more devices and setups.