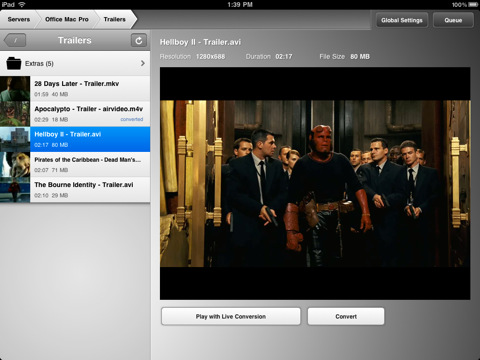 Air Video, the popular iOS application to stream movies from a computer with real-time conversion, was updated last night to include support for iOS 4.3 (now in GM and ready to be released this Friday) and a much requested feature since Apple unveiled iOS 4.2 months ago: AirPlay video out support.

You may remember, in fact, that Apple’s initial implementation of AirPlay didn’t allow third-party developers to use the new feature in their apps. AirPlay video streaming was exclusive to Apple’s own applications for iPhone and iPad, and not even Mobile Safari could stream videos to the Apple TV. With iOS 4.3, however, Apple revised its decision (or simply had time to properly enable system-wide AirPlay support) and now allows every developer to implement the AirPlay APIs for video-out streaming.

The latest Air Video update supports AirPlay with iOS 4.3, and that’s it. Not a huge changelog, but the feature is the one we’ve been waiting for. As for those who think the new Home Sharing might make apps like Air Video or StreamToMe useless, please keep in mind that Air Video supports any kind of file, in any location, with on-the-fly conversion to iOS. iTunes’ Home Sharing is sweet, especially for music, but Air Video still wins when it comes to video support.

The new Air Video is available here, and it requires iOS 4.3 and Air Video Server 2.4.5-beta3 or newer for AirPlay support.