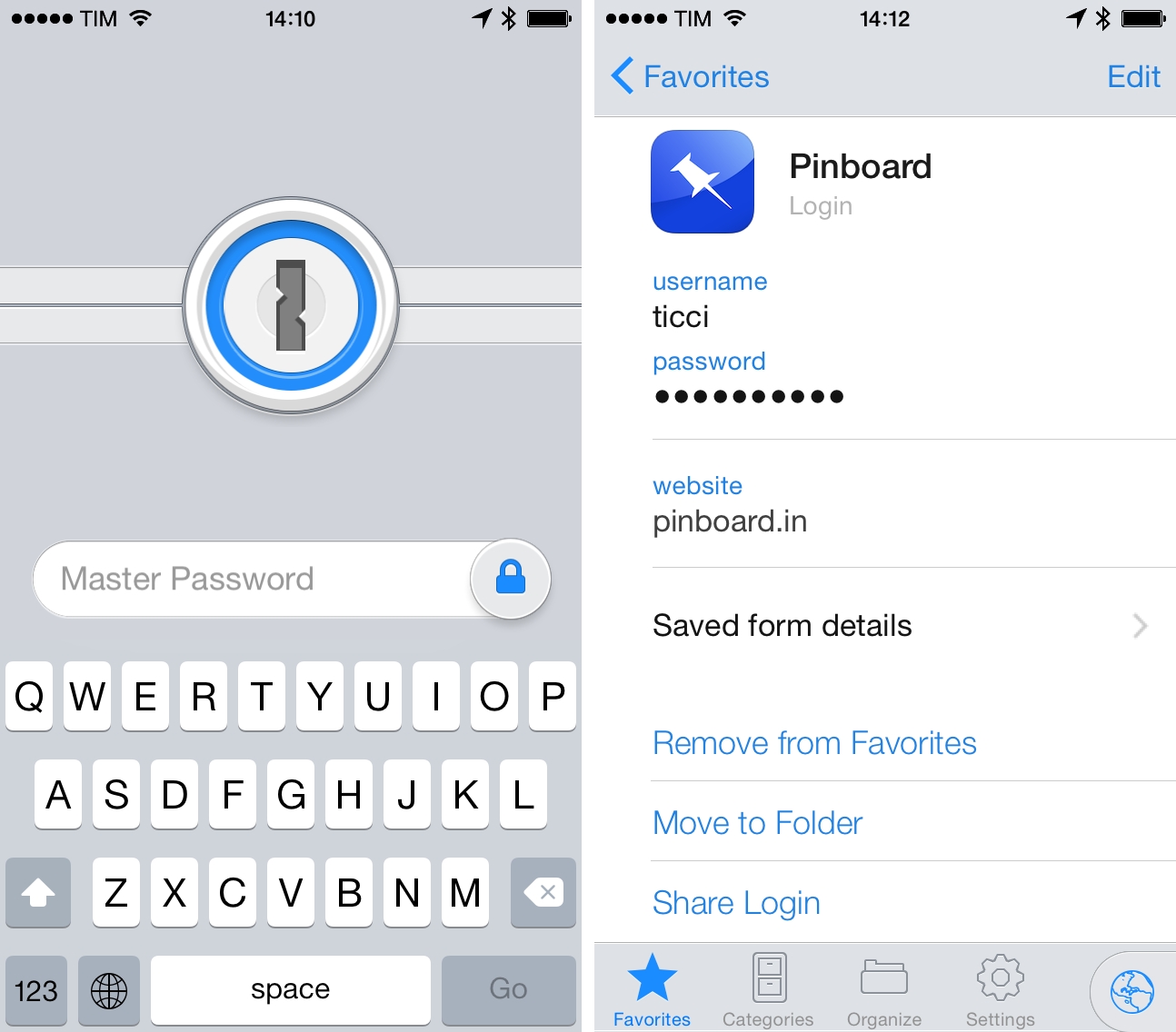 1Password 4 for iOS, first released in December 2012, was a major update to AgileBits’ popular password manager that introduced a new design, a powerful built-in browser to manage logins inside the app, and a variety of other features that were later ported to and expanded on OS X with 1Password 4 for Mac. 1Password 4.5, available today on the App Store, brings a complete redesign for iOS 7 and several other changes and feature additions that make 1Password officially optimized for the modern OS, further narrowing the gap between the mobile and desktop versions.

1Password 4.5 doesn’t deeply reimagine the way 1Password works, but every aspect of the app has received a facelift that needed AgileBits to reconsider each screen and menu with a refreshed design language that feels at home on iOS 7.

It starts with the lock screen, which sports a new light gray background that integrates with the default iOS 7 keyboard, which appears to be part of the user interface rather than an external interface element – it’s a minor touch, but it has been nicely implemented.

Throughout the app, AgileBits has adopted a subdued and polished style that, while not necessarily mimicking Apple’s choices with system apps like Safari and Mail, removes shadows, 3D buttons, and textured backgrounds in favor of a simpler, spacious look that leaves more room for content. Buttons are indicated through color and whitespace is used to separate lists from items and other menus; overall, it’s a clean design that’s probably easier to parse and read, but it doesn’t drastically alter the app’s organization in sections and navigation. The way logins and categories are managed is still based on 1Password 4, which will be instantly familiar to existing customers.

In terms of features, the first-run experience has been redesigned to better guide users through the vault setup process, which now supports the ability to switch between multiple vaults first introduced last year on the Mac. Once configured, vaults can be managed and opened from the Settings; for the new version, AgileBits has turned the app’s former Demo Mode into a Demo Vault, which retains the previous mode’s demo purposes while also serving as a tutorial on how to change vaults inside 1Password.1 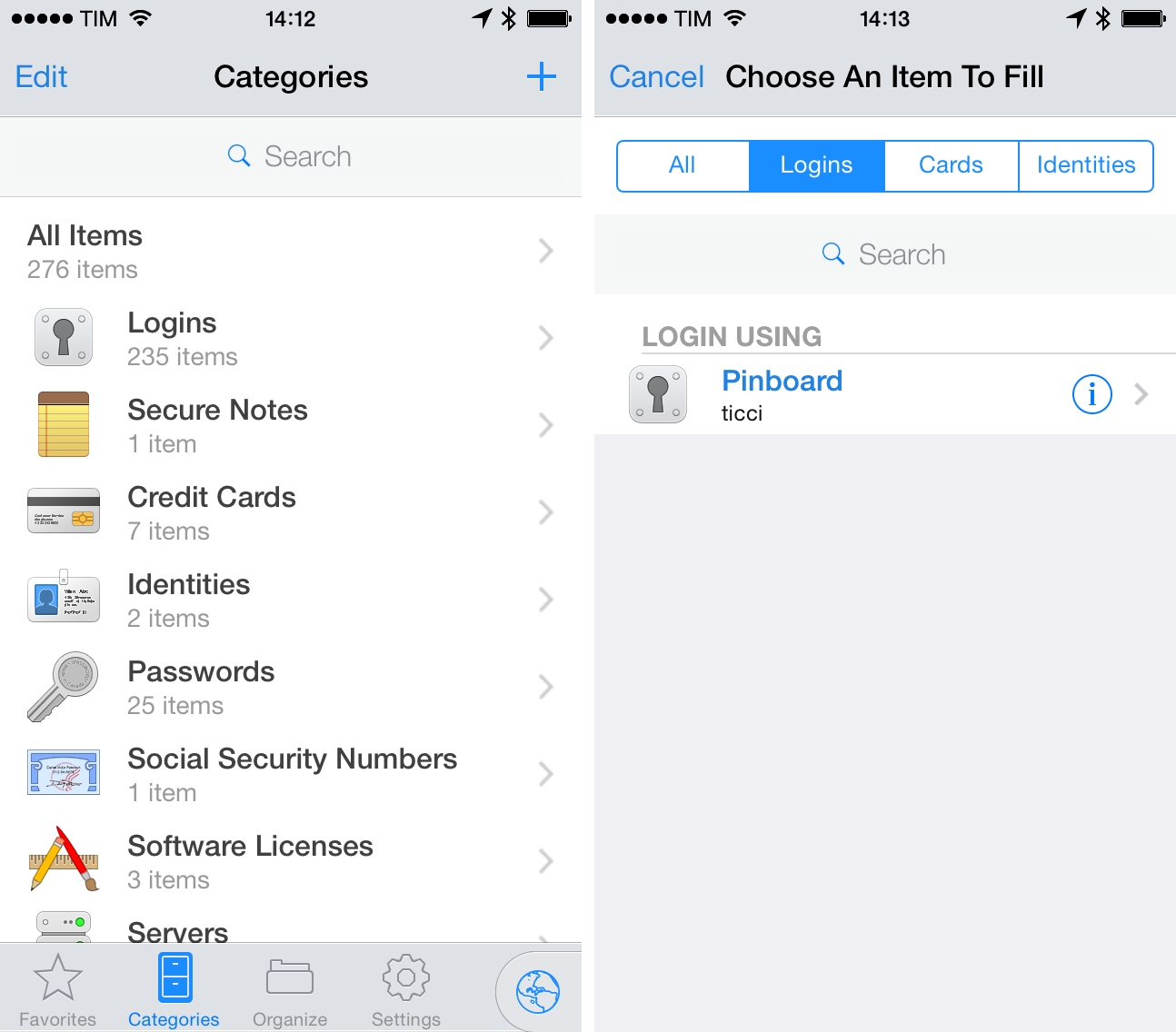 Perhaps the most useful addition for users who keep hundreds of items in 1Password is the search field, now available at the top of the main Category page as well as every sub-category (such as logins, credit cards, and notes). It may not sound like a major addition – after all, it’s just a search bar – but it drastically reduces the time spent navigating 1Password to find a specific item. Now, you can simply head over Categories and hit Search to filter all items from all categories. Alongside the possibility to browse tags created on the Mac (alas, new tags can’t be created or assigned on iOS yet), I’ve found myself spending less time hunting for a login in my 1Password vault, which is a welcome change, particularly on the iPhone.

Another change that I appreciated in my time with testing 1Password 4.5 was the improved 1Browser. In this new version, AutoFill options for logins, identities, and credit cards have been integrated into a single button in the browser that, like 1Password Mini for Mac, keeps everything into a single menu with tabs to filter by category.

Using a search bar, you can find items for the current webpage in the All tab, or you can refine AutoFill results by selecting Logins, Identities, or Credit Cards; items can be tapped for AutoFill like before, or you can press the “i” button to open an inspector that allows you to edit an item directly from the browser. Like search in the Categories tab, this feature seems to be primarily geared towards saving taps and time on iOS, which is a smart decision.

In my tests, 1Password 4.5 showed faster and more reliable sync, but I also noticed a number of UI glitches and inconsistencies that could have used more polish for this public release. Aside from those minor problems, I found the new Sync menu in the Settings to be harder to understand visually: in the old version, 1Password showed a spinning Settings icon that provided a visual cue as to whether sync was in progress or not, whereas now that information is only available in a dedicated Sync screen that doesn’t show progress as clearly as before. Curiously, in spite of the iOS 7 update, AgileBits hasn’t brought background fetch to 1Password yet, which would make sense for those who use the app with Dropbox.

Overall, 1Password 4.5 is a good update: the app is faster, looks at home on iOS 7, and, more importantly, it’s faster to operate thanks to tweaks in search and the built-in browser. There are plenty of other smaller additions, but there’s also still room for improvement: aside from UI refinements, 1Password still doesn’t completely mirror the feature set of the Mac app, which offers full tag management and Security Audit. AgileBits took their time to refresh 1Password for iOS 7, and I’m looking forward to updates that will make the app – one of my must-have utilities on any platform – more powerful and capable of syncing with Dropbox vaults in the background.