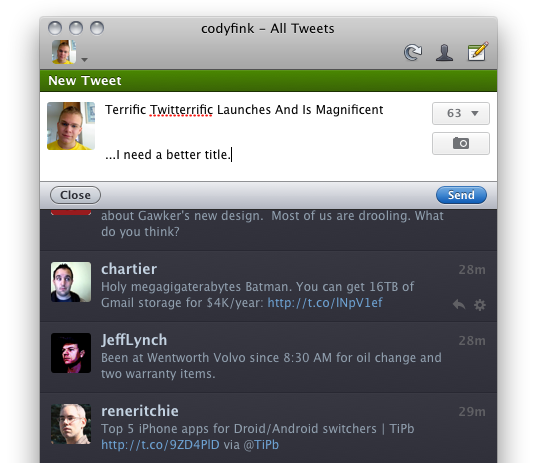 My first exposure to Twitterrific was when MacHeist casually offered Ollie as part of their first nanoBundle, alongside great applications such as WriteRoom and TinyGrab. While the third version quickly grew outdated in part because of Twitter’s continual feature growth and the IconFactory’s focus on providing parity between iPhone and iPad iterations, Ollie remained perched in my menubar for quite a while thanks to its minimal HUD interface. It was this Aqua-less client that faded into the background as I went about my other tasks that was supposed to be a permanent mainstay on my MacBook. I loved everything about it despite criticisms of it being ugly or lacking features, and if I wasn’t as vigorous on Twitter as I am today it would still be perfect for simply reading the latest incoming tweets. Though times changed, and I shelved my favorite mascot for Echofon while Tweetie garnered droves of followers in its presence.

While the OS X version of Twitterrific remained seemingly stagnant, the IconFactory made a rather large push into the Twitter realm with the iOS versions we’re familiar with today. Starting with the iPhone, the IconFactory practiced bringing a familiar experience across mobile devices by simplifying how we interact with Twitter. There is no excess interface or useless presentation of information: the IconFactory replaces Twitter’s originally dull and now confusing web interface with an inline, color-coded approach whose design is recognizable across the Apple community. Macworld named Twitterrific the ‘Twitter Client of the Year’ in 2010’s App Gem Awards, and you can bet the IconFactory would take their award winning design to the desktop. Steve Jobs wasn’t kidding when he said everything was coming, “Back to the Mac.”

Today, I’m glad to say that with the launch of Twitterrific 4 for OS X, it has once again reclaimed dominance on my Coca-Cola bottled desktop. 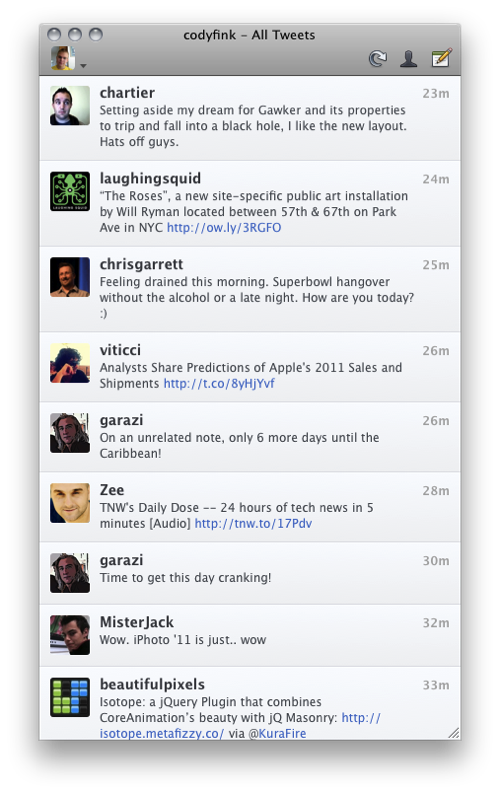 The new desktop client for OS X is exactly what a Twitterrific fan would want: a clean, uncompromising interface that mimics the experience we’re all familiar with on our iOS devices. Instead of taking Twitterrific into a new direction, the IconFactory completed the family by successfully creating a mouse friendly interface that behaves exactly as you’d expect it to coming from Twitterrific 3 and iOS versions.

Interacting with Twitterrific 4.0 on the desktop is quite brilliant once you see how its iOS siblings influence consistent and simple actions. Replying or commenting on tweets is easy as clicking on the reply arrow as you hover over tweets. Reviewing conversations can be performed from right-clicking tweets or by pressing the gear to bring up additional actions (as was done in the previous desktop version). A customizable toolbar initially mirroring the iPad can be tailored to provide quick buttons for messaging or favoriting tweets. It’s unassuming yet powerful: the latest version of Twitterrific was built to be incredibly user friendly and easily adaptable. 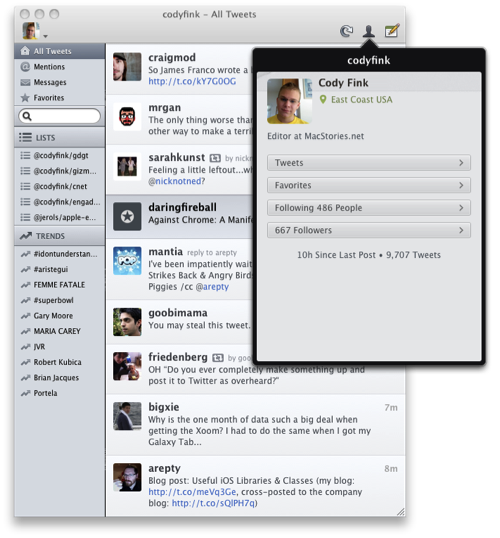 Unless you explicitly want to filter Mentions, Messages, Favorites, or search terms, you are never taken away from the main timeline. A bit of iPad functionality is introduced here: clicking on an avatar presents an iOS styled popup that allows you to view a friend’s profile, perform actions, and enable users to quickly view their timeline. A beautiful ribbon is exposed if you’re currently following someone, though you’re also given the chance to block your mortal enemies via the action menu. 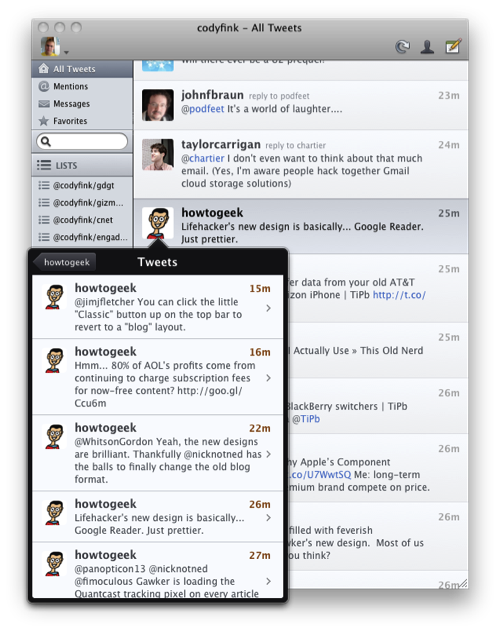 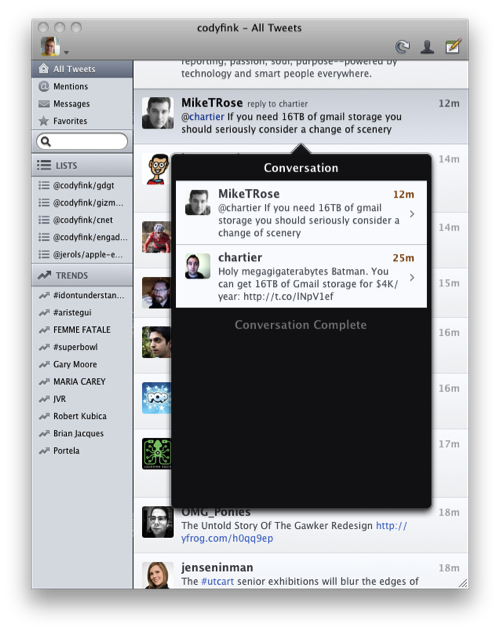 This approach to navigating is also present when viewing conversations – it’s simple and provides a way to quickly return home by clicking on the timeline in the background. By double clicking on a tweet, right-clicking, or using the gear (action) icon, you’ll find multiple ways to engage in conversations. Whether you’re coming from Twitter for Mac or Echofon, you’ll be instantly familiar with many of the conventions used to view additional information. The bonus with Twitterrific is that the information shown tends to be really pretty. 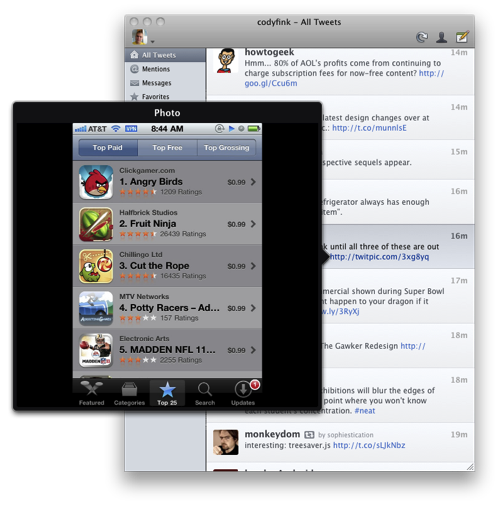 Pictures from Twitpic and yfrog for example also get the popup treatment, and links have the option of being opened in the background for when you complete Twitter reading. Instapaper fans can also save links to their accounts without opening a web browser, though I find this particular feature unappealing on the desktop as you usually want to see how long an article is in a browser before you decide to read it later. More useful is the ability to email tweets, especially if you’re processing information with OmniFocus. 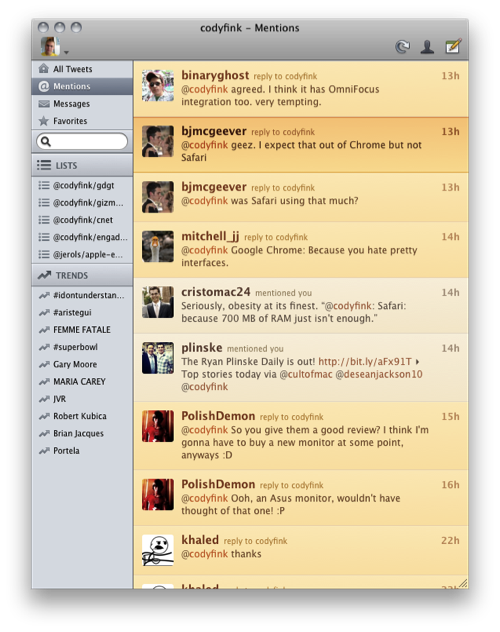 A left sidebar provides all of the filtering we talked about earlier, which can be hidden using the ⌘L keyboard shortcut. You can toggle the sidebar at any time, giving users some choice as how to view their information via lists or today’s trends. If you don’t particularly care about the hottest trends, they can be completely hidden from the preferences if a certain tween singer takes over the Internet.

I included a quick video so you can get a feel for Twitterrific’s interface just in case you’re stuck at work. Contradictory to the video, scrolling and interface actions are a lot smoother when I’m not screen recording (but still not quite buttery smooth like Twitter for Mac).

Like any good Twitter client, Twitterrific gives you the ability to integrate with multiple Twitter accounts. I myself have a couple on standby for various tasks (including our @macstorieslive account for major events), and you jump to different accounts via ⌘J. You can also click on your pretty mug in the toolbar which provides a list so you can jump to specific accounts (there’s also a shortcut to your account settings so you can add additional accounts). 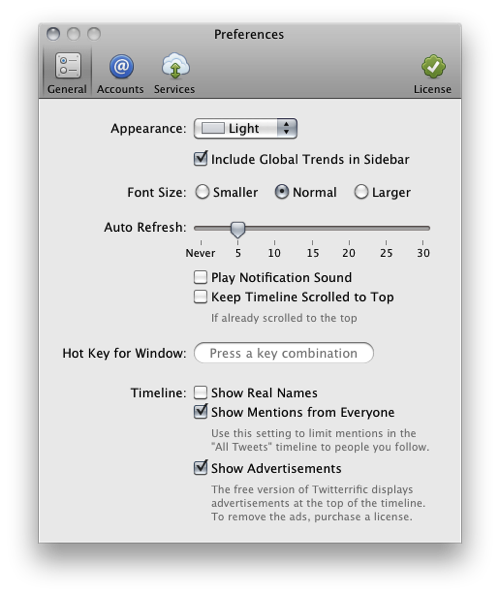 Fans of Twitterrific’s light interface will again have the choice to toggle between interface colors via the preferences, while also adjusting variables such as the refresh rate, font-size, and whether you want to show real names. You can also disable Twitterrific’s notification sound if you don’t want to go crazy listening to Ollie chirp at every refresh, but you can keep your timeline scrolled to the top if you only care about the latest and greatest tweets. Advertisements appear in Echofon fashion, but can be removed by purchasing a license from either the Mac App Store or The IconFactory’s Website.

It may be disappointing that Twitterrific 4 didn’t launch with features like streaming or filtering, but my bet is these future additions will be rolled out across all Twitterific versions in future updates. The IconFactory’s concern with this initial release was to get the desktop app up to date with their current iOS offerings, completing the Twitterrific brand and offering an ecosystem for users to tweet in.

Importantly, Twitterrific doesn’t change my links into t.co links, it stays put and doesn’t follow me from Space to Space, nor will its icon change with each update. I know the IconFactory is a good family that cares about the customer experience, and I’ll gladly pay for a client that uncomplicates my Twitter reading.

Instantly recognizable, Twitterrific for the Mac is simple to use, features a gorgeous interface with stunning icons embossed throughout, and delivers a sensible Twitter experience that doesn’t obfuscate content. It’s my Twitter client of choice, and I’d like to personally congratulate the IconFactory on their much anticipated release. Twitterrific users can download the desktop client from either the Mac App Store or direct from the IconFactory: licenses are $9.95 to unlock multiple accounts and optionally remove advertisements. The IconFactory has announced an official launch on February 10th, thus Twitterrific may still be propagating in the Mac App Store depending on your location worldwide.

Update: The new Twitterrific website is live! Download the free, ad supported version or buy Twitterrific 4 for $9.95. If you’re upgrading from Twitterrific 3, you have an opportunity to upgrade at a $2 discount.

Update 2: Twitterrific should now be widely available in the Mac App Store.