Sofa is well known for their incredibly well designed applications. Their beautifully designed apps are often aimed at the more advanced user or specifically marketed for developers. Their subversion app Versions won an Apple Design Award, and their newest app Kaleidoscope continues this trend of amazingly looking, and hugely functional, OS X apps. 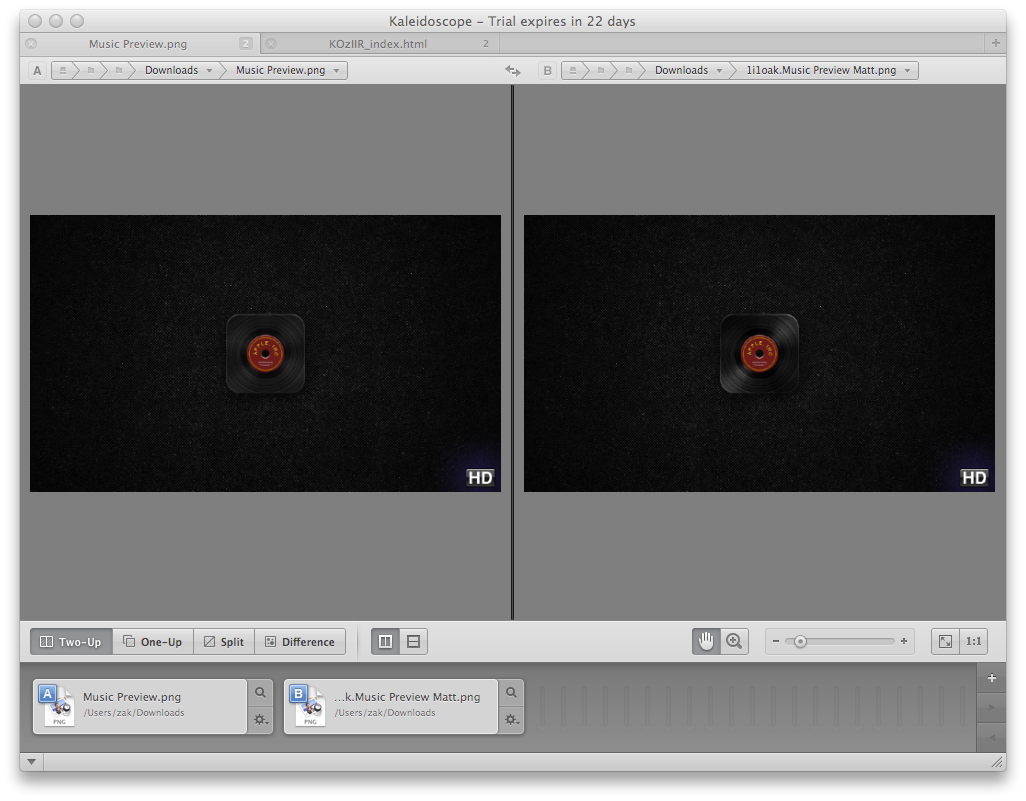 Kaleidoscope starts by asking you to drag files to compare. If the files are images than you are presented with the Image Scope. The image scope has four modes: Two-up (pictured above), One-up, Split, and Difference. For screenshots of each mode you can look here. The two-up mode is fairly simple. It displays both images side by side. You can zoom in, and there are presets for 1:1 and fitting the image to the window size. One-up displays one image at a time, but in the same position. It has an awesome feature where you can set a time rate and it will switch the image in a loop at that rate.

In the split view it displays the image in a similar way as the one-up view, however there is a divider that splits the image in half with the original image on the left and the comparison image on the right. This view is particularly useful for images that only have subtle differences. I find it nice to be able to drag the image and see the changes. 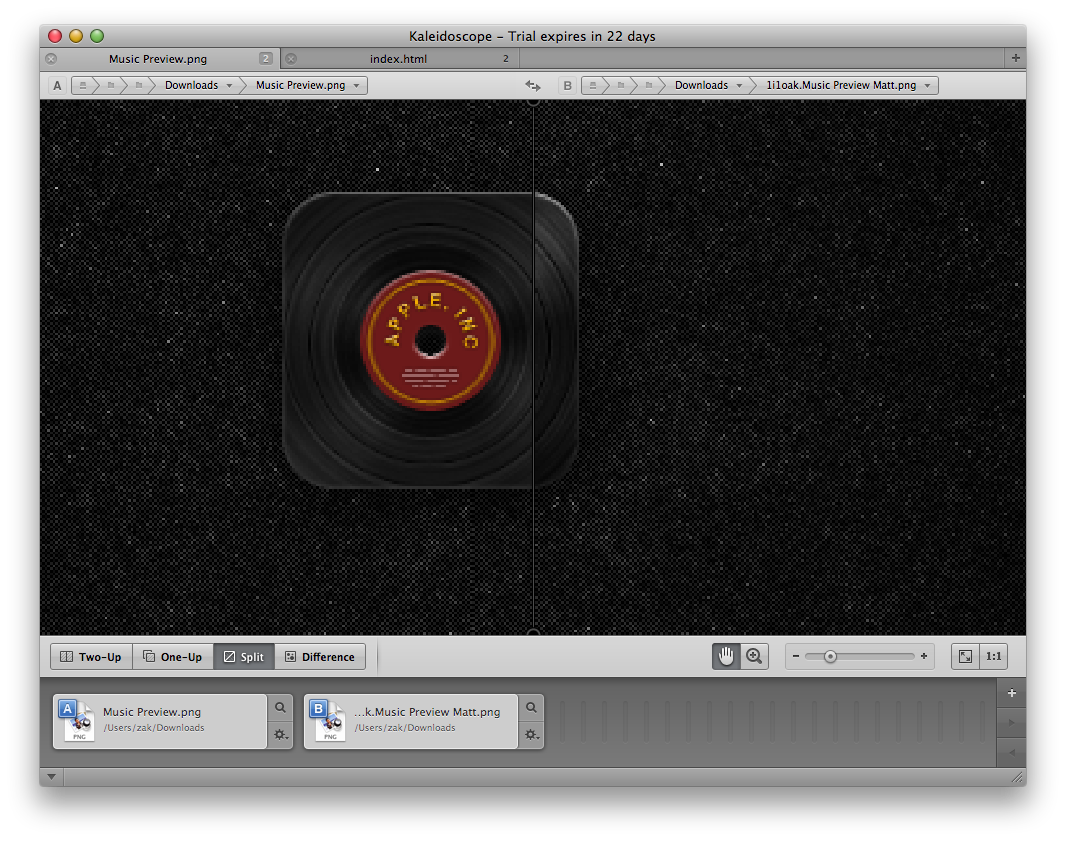 The difference scope is also quite handy. It compares the two images pixel by pixel and highlights the pixels that differ between the two images. Text scope has a completely different user interface, once which is perfectly suited to looking at changes in text files.

Text scope has three separate views. Blocks puts the text all on the same corresponding line, by adding space where text has been added or deleted. I personally find this view to be the most useful as I can see where stuff has been added and taken away without having to do much thinking. Fluid view is interesting. It uses a flowchart type view to display the changes. I personally find this view to be confusing as it is sometimes hard to tell where a change was made, and which lines in the comparison file it corresponds to. 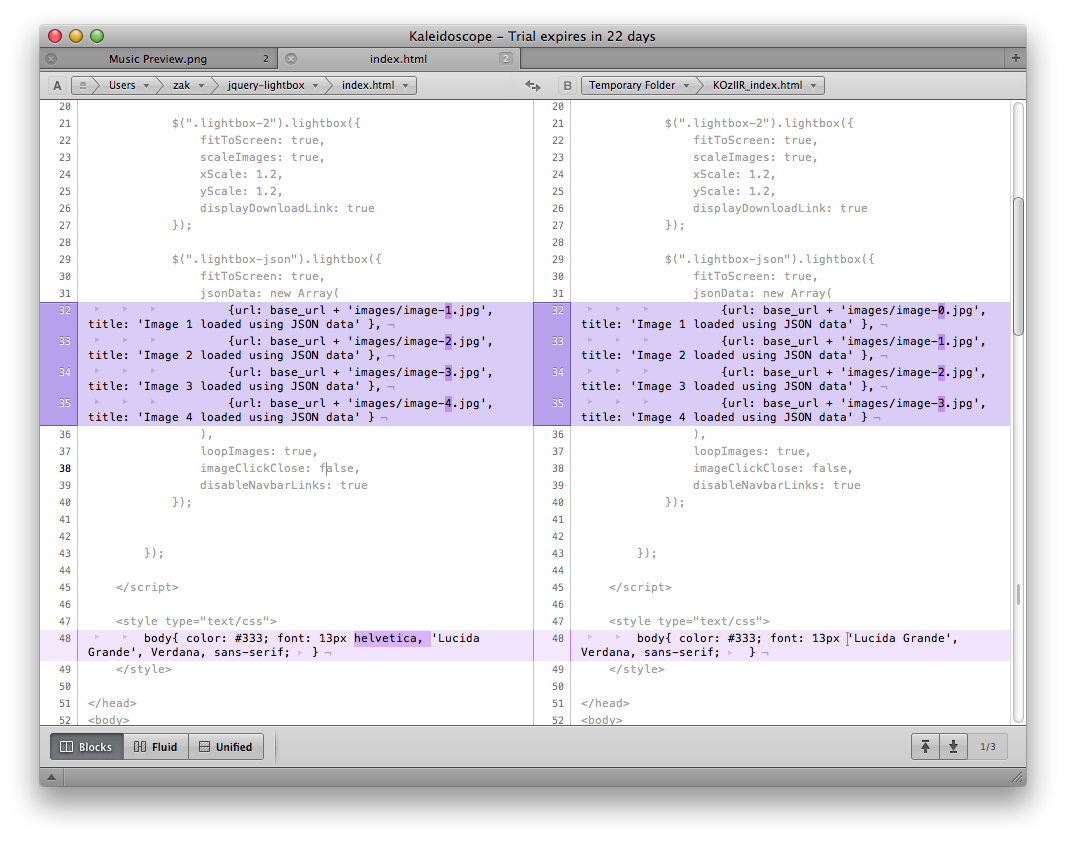 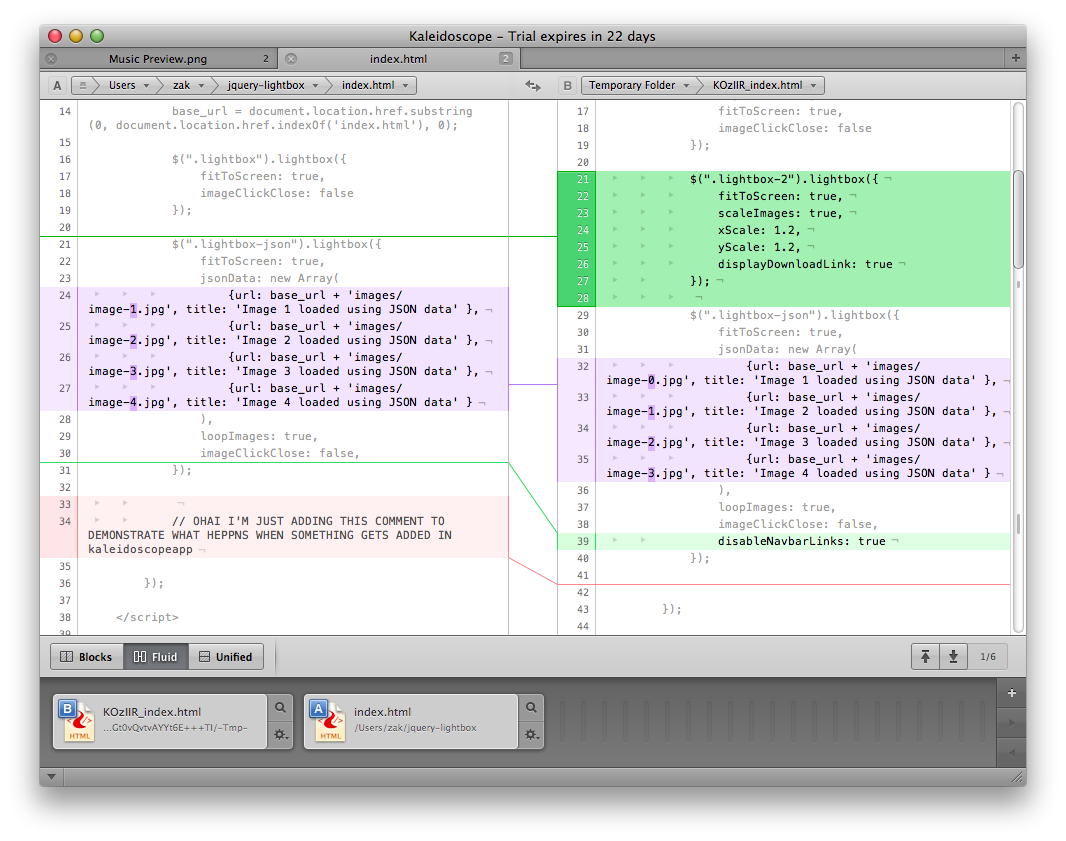 Finally, unified view displays the text in a single column with the line delineation on the left split up between the two files. This view is handy for looking at your files all in one place. While the way the display is set up takes some getting used to I find unified view equally as handy block view, especially when Iʼm comparing files where iʼve replaced whole sections of the code. 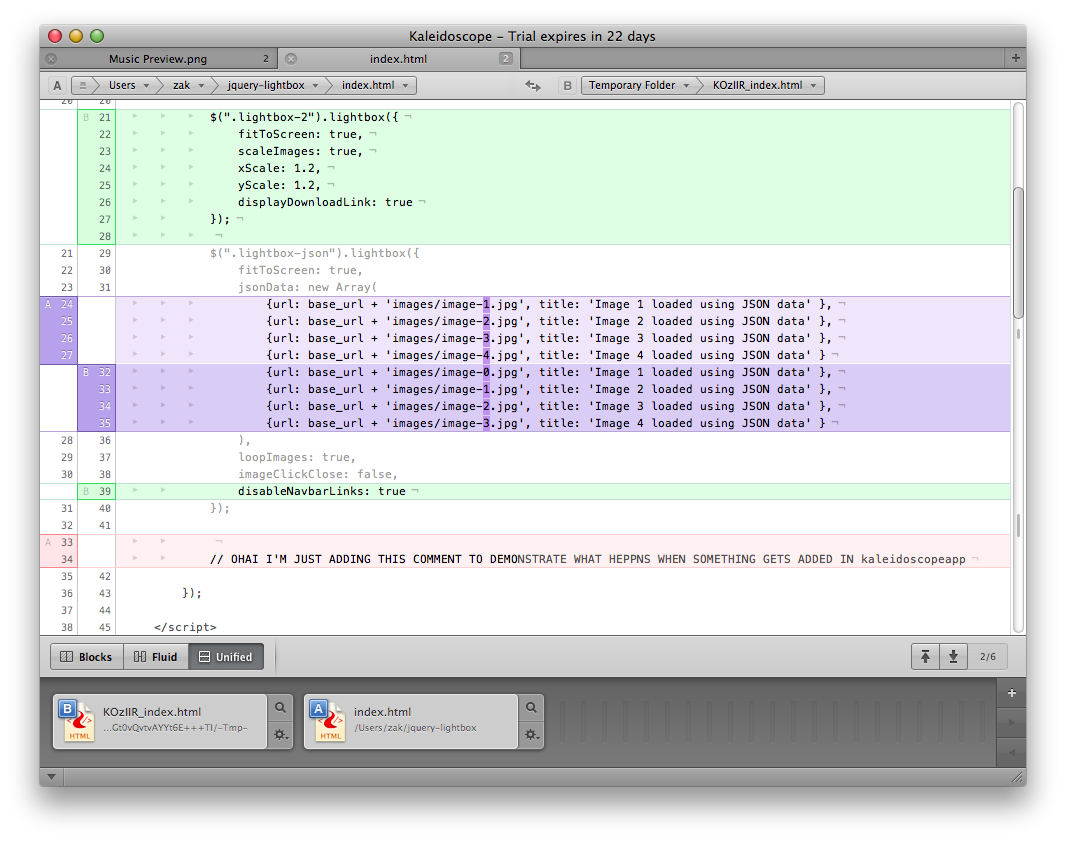 For the super geeky among you Kaleidoscope also comes with a custom command line toolset with integration into SVN, Git, Bazaar, and more. This is one of those features that you didnʼt know you were missing, but once you try it you canʼt live without it. This alone makes the app worth it for me. (for those of you wondering, I have purchased a license, but I took the screenshots prior to purchasing, hence the trial version). There are, however, certain features that bug me. When using two fingers to move a photo around the view the Y axis is not inverted, as it would be when scrolling a web page or a normal OS X scroll view. So far this is my only gripe, and hopefully Sofa will respond to my email and fix it in an update.

Is Kaleidoscope buy worthy? Yes. 100% yes. For about $38 Kaleidoscope is a steal given itʼs incredibly useful (and crazy fast) feature-set.