We have covered Itsy, a minimal Twitter client for Mac by mowglii, quite a few times in the past. What’s great about Itsy is that it’s simple and focused, taking the clutter way to let you concentrate on what really matters: the tweets.

The old 1.x version was falling under the weight of Twitter incompatibilities and different APIs – it needed a major update. 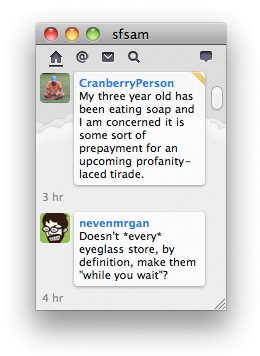 Last week developer mowglii released the long-awaited 2.0 version of the app, which adds support for custom themes (you can select them in the Preferences), tweet deletion, support for three-finger swipe gesture to navigate (Snow Leopard-only) and lots of bug fixes and overall improvements. Itsy was indeed very popular thanks to its community of designers and users who came up with stunning mods of the original interface. Now theming is officially supported in the app. Great news.

Itsy is free. You should give it a try.