Mac computers have a very small share of the worldwide PC market: around 3.5%. Those are small numbers if you look at the big picture, but very important sources of revenue when it comes to Apple, which doesn’t license OSes but sells computers. You know the drill.

Now, what’s interesting to notice is that, according to Needham’s Charlie Wolf, the Mac is doing pretty good and growing fast in large enterprises.

Breaking down the Business portion of the data, Wolf found that the fastest growth is in enterprises. Take a look at the image below: 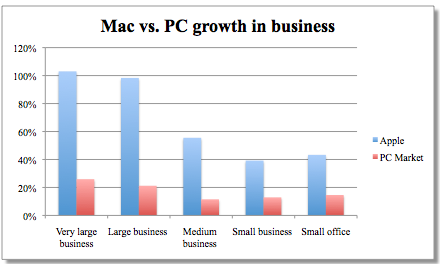 Last month we reported that US Mac sales, according to the NPD Group, grew 11% in June. With that growth in the US, enterprises adopting more and more Macs every quarter and Europe falling in love with Apple computers thanks to the iPhone, I won’t be surprised to see great financial results the next quarter, too. [via Fortune]