Alfred, the application launcher for Mac we covered a couple of times in the past, got a huge update this weekend: the public 0.7.2 beta introduced support for clipboard history, better file system navigation, better iTunes mini player support (for Powerpack users) and lots of bug fixes and new little features that are making Alfred the most powerful, yet lightweight and unobtrusive, app launcher for OS X.

The clipboard support is simple and well realized, though I don’t know if I’m ready to switch from Clipmenu just yet. You can assign a custom keyboard shortcut (full list here) to open Alfred’s clipboard view, which can persistently store items (even after a reboot) for a day, week or month. What’s interesting is that you can blacklist certain applications so that their copied items won’t end up in the history (such as 1Password or Wallet) and create a keyword to show the full clipboard results or clear them. The interface of the clipboard viewer resembles Alfred’s main view, but it’s got a list on the left and the full contents on the right. Too bad once you select an item Alfred can’t automatically fill a selected text filed. And it doesn’t support items other than text. Clipmenu does that stuff. Alfred’s clipboard history feature shows great room for improvement nonetheless.

As far as file system navigation goes, Alfred can now browse to the last opened Finder path, copy that path, open a folder in Terminal and show package content without leaving the launcher UI. It’s also got support for symbolic links (finally) and, yeah, it’s got a keyword as well.

The iTunes mini player got some new functionalities, too. You can now play songs by all artists and force the app to skip TV shows and Video from the Random playback. The developers also refined the underlying database structure and improved the Random algorithm.

Last, minor features (which I love) include support for Mailplane and Postbox if they’re set as default clients and an “email” keyword to quickly send a message to one of your contacts. Huge time saver and works great.

You can check out the full (and massive) changelog for this new version below. In case you haven’t tried Alfred yet, go download it right now here. 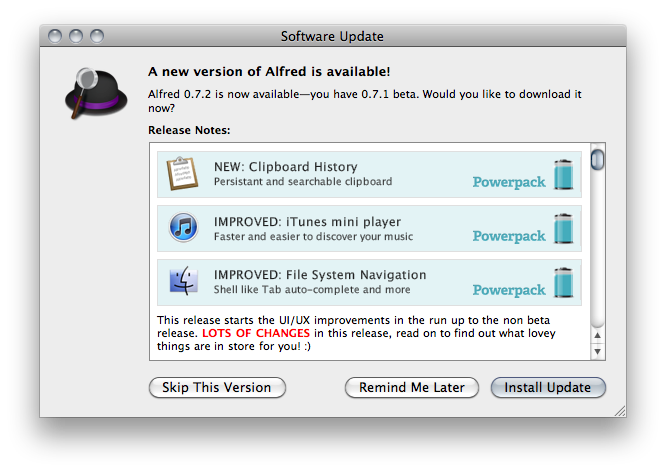 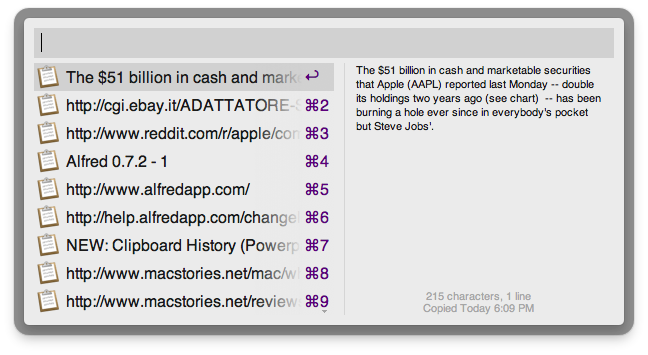 Text-based storage of items copied to the clipboard

When pasting a file system path into Alfred core, navigate to that path in file system navigation

Type Ahead on Result Actions to narrow down selection (e.g. type “em” to filter to “email” then press Enter)

Add ability to ‘Play all songs by Artist’

Make ‘email’ keyword accept open ended argument to allow for entries not in your address book such as ‘email foo@bar.com’

Use mailto: instead of AppleScript for email keyword, to work with the current default mail client

Ability to clear a hotkey by using the Esc key

Intelligent ‘up folder’ using backspace on File System Navigation and itunes player to replace alt-enter. Also cmd+up as per Finder.