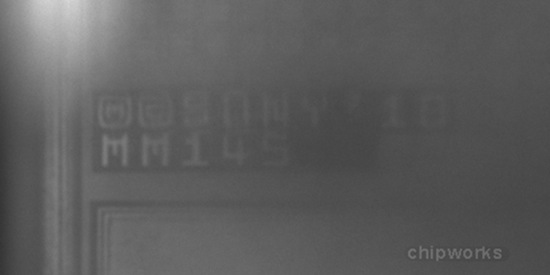 There was much speculation surrounding the supplier of the camera module of the new iPhone prior to the official iPhone 4S announcement, which confirmed the device has an improved 8 MP camera but didn’t give us any details on the manufacturer behind the component. In the months leading up to the iPhone 4S, you may remember Sony CEO Howard Stinger hinted at Sony producing the camera for the next-generation iPhone, though confusion arose as it wasn’t really clear whether he was being sarcastic in his statements or not. A report from June then noted both Sony and OmniVision – Apple’s main camera supplier for the previous iPhones – would supply a new 8 MP camera for the iPhone.

Following iFixit’s teardown of the iPhone 4S, Chipworks has put the camera module under a microscope, and confirmed that their unit has a Sony camera as seen in the die markings from the photos. This still doesn’t completely exclude OmniVision from the list of camera suppliers, but it seems to confirm rumors of a Sony camera were correct.

In order to get our readers the device manufacturer as soon as possible, rather than going through a fuming sulfuric acid chip deprocessing we chose to use our infrared microscope to look through the structure of this image sensor. What you see are the die markings on the base layer of the image sensor. The image isn’t beautiful, but it’s enough to tell us that Sony is in our particular iPhone 4S.

The iPhone 4S’ camera has been known to feature improved optics, allow for 73% more light through the lens and, overall, shoot sharper and crisper images, as well as 1080p HD video. You can check out Chipworks’ teardown and X-ray images here. [via]