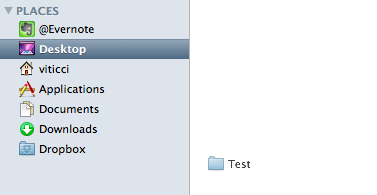 With Mac OS X 10.6.7, Apple not only messed up (and then fixed) font handling (see “OpenType PostScript Fonts Troublesome in 10.6.7,” 27 March 2011, and “Apple Releases Snow Leopard Font Update,” 26 April 2011), they also changed the way you remove items from the sidebar. Now, instead of just dragging items out, you must either Command-drag them out or Control-click them and choose Remove from Sidebar.

I’ve noticed the change too: I was trying to drag a folder out of the “Places” tab, but it wasn’t working. At first I thought I had to restart my Finder for some reason, but that didn’t work either. So I realized maybe something had changed since the 10.6.7 software update, and tried to CMD-drag like I would for items in the menubar. Items in the Finder’s sidebar now share the same behavior of draggable items in the top menubar; Engst believes the change was made after some complaints about accidental removals happening too often, but, frankly, I never removed an item from the Places tab by accident.