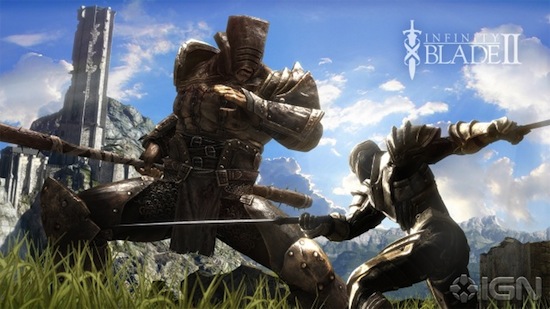 IGN’s Justin Davis got to spend some time with Chair’s upcoming iOS sequel to Infinity Blade, aptly named Infinity Blade 2, and says the game is a huge improvement over its predecessor:

It’s impressive what Chair has been able to pull off. The original Infinity Blade launched with about 10 combat locations. The sequel has over 40. It seems virtually every element of Infinity Blade 1 has been blown out. The company has aggressive post-launch plans far beyond just adding more swords and football helmets, as well. Clash Mobs are one teased feature. Players might fight an enemy with “10 million or more” hit points. If Infinity Blade players around the world whittle down the shared health pool, all participants can be awarded with special bonuses.

Infinity Blade 2 is due out December 1.

The original Infinity Blade was a success on the App Store (grossing $1.6 million in five days) and the first game to truly show what the A4 processor, Apple’s Retina Display and the Unreal Engine could do for mobile games. The game received a series of updates, including multiplayer support, but was criticized for its repetitive gameplay and tedious cut scenes. Infinity Blade 2 seems to have a fix for these issues, so make sure to read Davis’ preview to learn more.