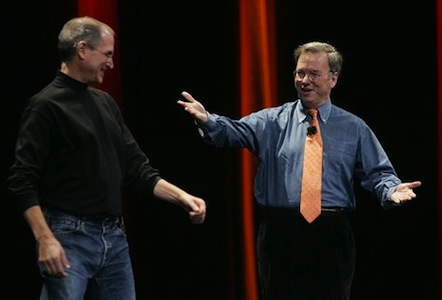 Schmidt also took on Google’s competition with Apple. Google partners with Apple, he said, on search, maps and YouTube. It competes, of course, on phones. Google also might in theory compete with Apple’s Macintosh computer business with its Chrome OS hardware that Google hopes “to announce later this year,” Schmidt said.

“Steve is absolutely brilliant,” said Schmidt, referring to Steve Jobs, CEO of Apple, where Schmidt was a longtime board member. “(He’s) the most successful CEO in the world anywhere.” Comparing Apple’s iPhone and iPad platform to Android, he said: “They managed to build an elegant, scalable, closed system. Google is attempting to do something with a completely different approach.