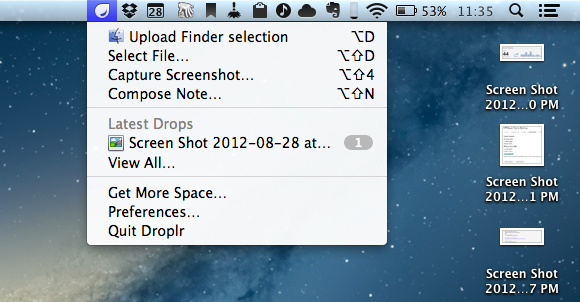 The developers of Droplr, a sharing utility for OS X, have announced that in order to release version 3.0 of their app on the Mac App Store, they will have to tweak the app’s “upload from Finder” functionality to comply with Apple’s rules.

The primary difference will be in the use of the global hotkey (opt+d by default) to share the currently selected item(s) in the Finder. The standalone version will continue to work as it always has, simply select something in the Finder, use the key combination, and that item will be uploaded to Droplr. For the Mac App Store version, when the key combination is triggered with the Finder active, instead of uploading the currently selected items, it will present you with an “open file” dialog where you’ll need to navigate to the item(s) you’d like to share and select them. We don’t believe this provides the best experience, but we do believe it’s an acceptable tradeoff to be able to remain in the Mac App Store, especially given many of our users don’t use the key combination as a primary method of sharing with Droplr.

This update from the Droplr team is particularly interesting as, back in May, speculation arose as to whether Apple would start rejecting any app with “global hotkey functionality” on June 1, when the company began enforcing its new Sandboxing policies for Mac App Store apps. As it turned out, the rumor didn’t specify which kind of apps would fall under Apple’s ban, but several third-party developers confirmed their applications carrying similar functionality went through Apple’s approval process.

However, it appears the “issue” with Droplr 3.0 and the Mac App Store is simply related to standard Sandboxing practices, not strictly hotkeys. It is safe to assume that, per Apple’s Sandboxing implementation, an app like Droplr can’t benefit from unrestricted access to the Finder to automatically upload a file in the background. Several developers I have contacted about this issue confirmed that it’s not a surprise Apple is requiring an Open dialog to access a file outside of the Sandbox, and that this would have been true even if Droplr wasn’t combining the feature with a global hotkey. So while a calendar app can show itself with a hotkey, or a todo app can display a systemwide quick-entry panel, Sandboxing requires an app that accesses files directly (like Droplr does) to go through an Open dialog.

Read Droplr’s blog post here, and our report from May on Mac App Store apps and global hotkey functionality here.