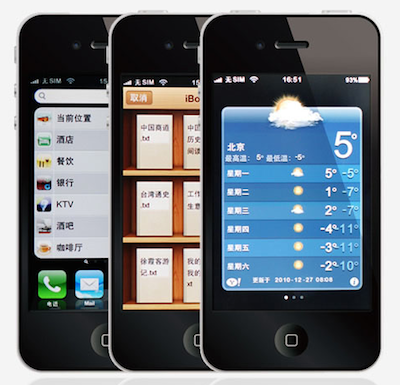 I can’t believe I’m about to say this, but: this Chinese knockoff almost looks as good as the original iPhone 4. The SoPhone is, without a doubt, the closest thing to an Apple iPhone 4 I’ve seen so far – not just because of the strikingly similar exterior design. First off, the SoPhone looks just like an iPhone 4, has the same size (115.2×58.6×9.3mm) and fits in any case produced for the real thing. As long as the “glass sandwich” appearance is concerned, the SoPhone seems a success. We can’t comment on the actual build quality, but judging from the video – it’s an iPhone 4.

Problems arise when the average user willing to buy a SoPhone (example: my dad) wants to go deeper and asks about the operating system and internal specs. This thing of course doesn’t run iOS, but the average user might think it does. I mean, look at the video: it’s a well-done iOS skin (probably built on top of Android 2.2?) that’s got Apple’s icons, menus – even the Cover Flow. Guess what’s missing? The smoothness, the scrolling, the refinements – exactly what the “average dude” won’t notice on first sight. This is best shown in the comparison video shot by MIC Gadget. The SoPhone has got an Apple logo on boot, folders (slow), Spotlight and Springboard pages. It’s a fake iOS running on a fake iPhone 4. From what I can see, I believe multitasking’s in there, too. As for the specs, as you would expect this is nowhere near the iPhone 4: 2 MP cameras, no Retina Display, 4 GB of flash storage and a MTK6235 chipset.

The final price for a SoPhone unit? Around $200. Not bad for a well-done ripoff, but still – you won’t have an iPhone. You’ll only get close (closer than any other Chinese knockoff, that’s it) to it. If you’re on the edge, check out the hands-on video below. Unlike the reviewer says, I’m not sure the SoPhone is “very fast” though.