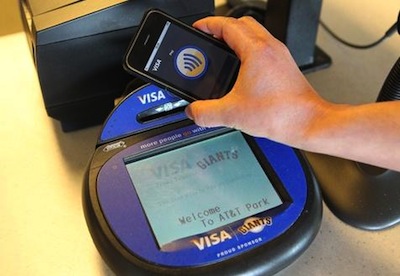 We covered NFC (Near Field Communication) technology before: many rumors and patents surfaced in the past detailing how Apple might be interested in implementing NFC in future iPhones to turn them into “digital wallets” capable of doing things such as on-the-go instant payments. While NFC cellphone-based payments are already reality in Japan and there are a couple of applications that can already do that on the iPhone without NFC (like Visa payWare), we have been speculating about Apple deploying its own solution for months now.

According to new report by Cult of Mac from an anonymous source, Apple might implement NFC in the iPhone 5, but not just for mobile “iWallet” payments. The source claims Apple has been working on a solution to let iPhone users carry their whole OS X experience around and use any Mac as if it was their own computer through an iPhone-based transfer system. Neat stuff.

But we’ve been told that Apple is also researching NFC for remote computing. For example, a NFC iPhone will allow users to carry a lot of their desktop data and settings with them — and load that data onto a compatible Mac.

If users wave a NFC-equipped iPhone at a NFC Mac (they need to be in close proximity to interact), the Mac will load all their applications, settings and data. It will be as though they are sitting at their own machine at home or work. When the user leaves, and the NFC-equipped iPhone is out of range, the host machine returns to its previous state.

Of course this rumor raises questions about the iPhone ability to store storage-consuming data such as entire databases, iTunes and iPhoto libraries or the Home folder itself, as Cult of Mac also reports. Will Apple make sure to ship a higher capacity iPhone 5 to grant enough storage, or is this going to be accessible through the cloud? Does the massive North Carolina data center ring a bell for you?

Cult of Mac warns this technology may never see the light of day although they’re sure Apple has been working on it. They also report on how NFC-equipped iPhones may be able to change the communication method from NFC to Bluetooth and Wifi for faster file transfer.