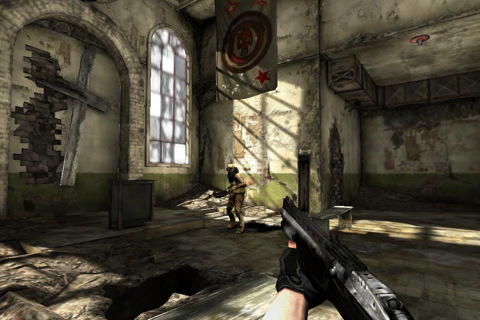 Together with Epic’s Infinity Blade, John Carmack’s Rage HD is the app that really shows what gaming on iOS devices has become: an experience that, technically speaking, is at the same level of consoles such as the Wii or the PlayStation 2. Rage is impressive, and the latest update (1.11, approved last night) adds a lot of new features to make it even better.

First off, you can now play Rage on your TV (or an external monitor) using an iPhone or iPad as a controller. You can output the game at 480p with the official Apple Component cable (Amazon) or 720p with the official Apple VGA cable (Amazon). This is neat, and reminds me of The Incident, which added a similar TV out functionality in its last update. Rage HD on a TV must be fantastic.

The app now comes with Game Center integration, but there’s no online multiplayer option. Instead, the developers implemented leaderboards and achievements. If you feel like unlocking them all, you have 50 new achievements to add to your list.

Other features include gyroscope controls for iPhone 4 and iPod touch 4th gen, mirror mode and (finally) a Museum Mode to explore the levels without mutants.

Rage HD 1.11 is a great update. As the app description says, “the update you’ve been waiting for”. Go download it here.