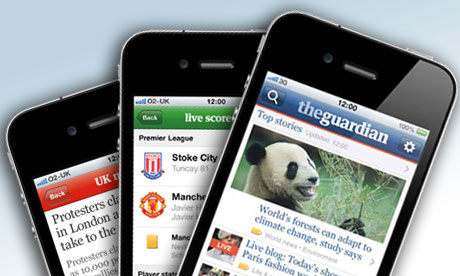 Early in December, rumors pointed to The Guardian about to launch an updated version of its iPhone app that was set to feature a new iTunes subscription model which could grant readers access to the app for either 6 or 12 months. The story was interesting because it was the same week blogs speculated Apple may unveil iOS 4.3 with the new rumored “iTunes app subscription” feature very soon.

The updated Guardian app is now live in the App Store and it comes with the previously reported £2.99 / £3.99 price point (for six and twelve month access, respectively), but it doesn’t seem to be using any of Apple’s upcoming subscription system. Rather, the Guardian publishers and developers have implemented standard in-app purchases to allow readers to enjoy the digital newspapers for a limited period of time. The app is a free to download with subscriptions for UK readers, but it’s ad-supported in the US. According to The Guardian, US readers account to only 8% of the downloads.

As explained by the team in an introductory blog post, users who downloaded the first version of the app will have free access for another six months.

The Guardian for iPhone is available here. Check out what’s new in this version below.

• Faster, automatic updates for our live news and sport blogs - no need to refresh

• Our award-winning video content is included for the first time, and looks great whether you’re connected via 3G or Wi-Fi

• You’ll see reader comments below articles that are open to them; we’ll be adding in the ability to add comments via the app as soon as we can

• A new way to view the stories trending across guardian.co.uk and social media (otherwise known as Zeitgeist on our website)

• Use the app in portrait or landscape mode

• A brand new search facility, which we believe makes this one of the most comprehensive news apps