This is surprising: the iPhone 4 went on sale in China last weekend, and chinese carrier Unicom can’t keep up with the demand which has already exceeded the initial supply. Unicom received 200,000 preorders since September 17th and sold more than 60,000 units last Saturday. More than 1,000 people waited in line at Apple’s Beijing store to get their hands on an iPhone 4. 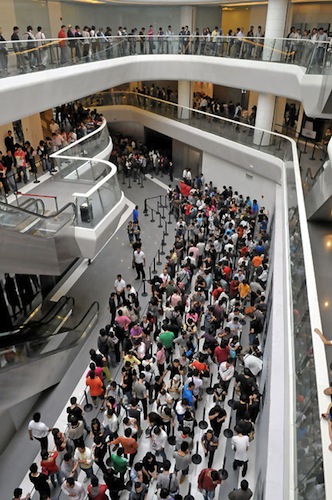 While it took 28 months for Apple to release the iPhone 3GS in China, it barely took 3 with the iPhone 4. Maybe Apple didn’t really believe in the 3GS performing well in China, or maybe it was just an unfortunate turn of events. Still, the current iteration is doing well and, according to a Unicom store clerk, “they are close to sell-out and there’s no timetable for the arrival of the second batch of products”.

An Apple spokeswoman said more iPhones will be available soon and that customers should check online or with local stores regarding availability.

The more I read about the iPhone 4 being sold out after months of its release, the more I wonder what’s cooking in Cupertino for the iPhone 5. The iPhone 4 is the device to beat.